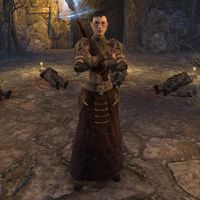 Nathari is a Reach witch and void mage who leads the Ghostsong Clan. She is also Arana's younger sister. Nathari believes awakening the Dark Heart is Namira's will, and has lead her clan to Lost Valley Redoubt to deliver a revelation upon them.

Void Bolt
A basic ranged ability fired off at a single target. This deals moderate Oblivion damage.
Shade Eruption
The Voidmother fires a beam of Void energy at one of her Shades, causing it to implode in an AoE that deals moderate to major Oblivion damage.
Grasping Void
The enemy forces one of its summoned Shades to explode, causing an explosion in a small AoE. Deals low Void magic damage over time when you stand in it.
Void Rings
The Voidmother turns translucent and green, then falls to the ground and contorts three times. When she hits the ground, a hollow ring approximately ten meters out from her will pulse. When she contorts the first time, a ring of Void energy five meters out will pulse, and when she contorts the second time, a small AoE around her with pulse. There are three pulses, and burst deals moderate to major Void magic damage. After the third pulse, the Voidmother picks herself up and begins levitating again.
Void Blackhole
Nathari summons an orb of green light in a large Void magic Aoe that draws you in. When you reach the green orb, you're knocked back several meters, and take low Void magic damage.
Sticky Void
Nathari sets a large AoE down in a large area around you. It deals Void magic damage over time and prevents you from moving. Arana will set up Void Portals for you to use to teleport out of harm's way. If you don't get out of the way, you'll be affected by Shade Explosion.
Shade Explosion
While Sticky Void is active, Nathari summons a giant Shade Colossus, which walks over to the AoE you're trapped in and explodes, dealing moderate Void magic damage.
Void Traversal
The Voidmother vomits glowing green and white Void matter and disappears into the mist it forms as it touches the ground. The Voidmother travels in a straight line for about 8 meters before reemerging. When she reappears, she shoots up from the ground, dealing moderate Oblivion damage if you're standing where she emerges.

When you meet her for the first time, she will be sitting in a ritual circle consisting of corpses. Arana runs up to the scene.

Arana: "Nathari, no! What have you done?"
Nathari: "The hour is upon us, dear sister! You must feel it. The darkness!"
Arana: "You sacrificed our own people! Oh, poor Saagan!"

She can be spoken to after this exchange.

"I should have expected Arana to take up with outsiders. She always rejected the old ways.
This is no place for one who doesn't hear the spirits of the Reach. You're not worthy to walk these sacred halls."
Worthy? You sacrificed your own people.
"And every one of them gave up their life willingly. They gladly died to awaken the Dark Heart from its slumber! Arana may deny it, but this is the day Namira has been preparing us for.
We give our souls to the dark in return for eternal life!"
And none of your people refused to lay down and die for you?
"You sound like Bradan. True believers see the honor in this sacrifice, but not everyone can overcome the fear that whispers in their ears. The flesh quails even when the spirit is strong.
No matter. We help them complete their journey."
In other words, you kill them, whether they agree to die or not.
"Why does this matter to you, outsider? The Ghostsong hunters—the true hunters—gather below, ready to give their lives for the Spirit Queen. Bradan will too, when his time comes.
I shall complete the ritual and awaken the Dark Heart! "
Lady Belain is using you. She doesn't care about your clan.

Immediately after this conversation she will teleport away and say:

Nathari: "The clan chose me, Arana! The Spirit Queen demands death and I shall give it to her!"
Arana: "Damn it. I should have never left."
Arana: "No. I can't allow this. We need to find Bradan and the others."

She can later be found in The Dark Descent where she will scream at you before teleporting away and leaving you to fight her subordinates:

As you delve deeper to The Dark Descent you can hear her performing the ritual:

She becomes hostile afterwards. When you enter combat, she'll say one of the following:

If you attempt to flee the encounter she, will say one of the following lines:

Nathari: "The darkness will claim you!"
Nathari: "Coward! Return and face me!"
Nathari: "I'm not done with you yet!" 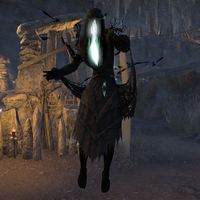 When her health falls to 20%, she will transform into Voidmother. When it happens she will exclaim:

Nathari: "The Dark Heart, it selects me!"

Nathari: "Your death will make me stronger!"
Nathari: "The darkness, it will consume you!"

If you try to flee the arena while Voidmother Nathari is alive, she'll say one of the following: