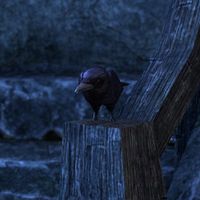 The Knave of Rooks

The Knave of Rooks is a crow of the Blackfeather Court found in Crow's Wood and the Clockwork City.

Decree of the CourtEdit

He'll be perched on the stairs of the burned down house in Crow's Wood.

"Intruder! Halt! Halt! Intruder!"
A talking crow?
"You have entered the domain of the Blackfeather Court.
You must pay the toll. Flesh or silver? Choose!"
And if I refuse?
"Then ... well ... things will go badly for you. Droppings on your shiny clothes. Yes, that's it! And incessant cawing! We'll keep you awake all through the night.
Do not cross Blackfeather Court, intruder."
I'll humor you, crow ... for now.
"There are two tolls you can pay: the toll of flesh, or the toll of silver. Choose!"
Tell me about the toll of flesh.
"The toll of flesh commits you to fight our enemies, the wretched bats of this wood.
Each time you kill a bat, we'll descend to feast upon the bat's tender bits."
Tell me about the toll of silver.
"The toll of silver! Search the dark caves and the farthest corners of the woods. Collect trinkets of shiny silver left by those who fell to the wolves.
Glitter and glister! Such trinkets please us with their luster."
I'm ready to choose.

"Speak then, featherless one!"
I choose the toll of flesh.

"Then we shall feast on our foes. When you have killed four and four of the flying rats, find the Seneschal of Carrion."
Eight bats? I can do that.

I choose the toll of silver.

"Then go to the caves and bring us trinkets.
The Seneschal of Carrion awaits at the Blackfeather Court far up the road to accept your shiny, shiny tribute."
I'll get the silver.

If you've previously encountered him in the Clockwork City, you may ask him:

Don't you recognize me? We met in the Clockwork City.
"The Clockwork City? That place of metal, metal, and more metal? I hate that place! Let us never speak of it again!
Now, do you have any plans for your entrails once you no longer need them? Perhaps we can come to some arrangement."

He'll relocate to where the other members of the Court are. Speaking with him here:

"Pay the toll or pay the price. Something, something … rhymes with rice. Yes. Almost got it.
I'm not good at warning rhymes yet. Don't look at me like that!"

If you talk to him after paying the tribute, he'll say:

"Look! See! Didn't mention this before, but you have beautiful eyes.
When you die, can I eat them? Snack?" 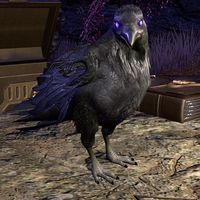 The Knave of Rooks in the Clockwork City

He can be encountered with some of his court members while Constable Drados tries to get rid of them:

He can then be approached by the tree near the Basilica, where he will be quite aggressive:

Knave of Rooks: "Intruder! Halt! Halt! Speak, or be pecked!"

As you speak with him, he will recognize you if you met previously in the Crow's Wood:

"Spy! No talking! I know a spy when I see one! The Exarchs of Dross may share meat with the featherless giants, but not the Blackfeather Court!
In wartime, only spies approach without tribute. Every bird knows that!"
What if I go get a tribute for the Court?
"Tribute! Yes! Shinies for the Duke!
We demand a treasure from our enemy! The metal man who shouts at us—Constable Drados. May his tail droop and his wings wither! Snatch up his silver treasure, and then we parley. Go!"
Where can I find this treasure?
"Perhaps he carries a treasure beneath his clinkety-clanking clothes. Or maybe he hides treasure away in the stone nest called Cloisters. That is for you to find out, Featherless! Now go!"

You can ask the Knave some questions before fetching Drados' silver belt buckle:

"Why do you linger, Featherless? Fetch our treasure or begone! Begone!"
Who are you?
"Bah! Questions!
I am called the Knave of Rooks—craftiest and cleverest vassal of the Blackfeather Court. Sometimes loyal servant of the Duke of Crows himself!"
And what exactly is the Blackfeather Court?
"Truly? You have not read about us in your histories? Ridiculous!
The crows of the Blackfeather Court rule the skies of Oblivion. We hold dominion over the realm of Crow's Wood and many lands beyond. All lesser birds pay us homage!"
So, you're from Oblivion? Like Daedra?
"Daedra? Do we look like Daedra to you? Daedra look like crocodile men, and fat-faced ogres, and plate-necked turkeys! Every bird knows that!"
And these Exarchs you mentioned? Are they birds like you?
"Yes! The Exarchs of Dross! Our hated rivals. They fancy themselves crows, but they are nothing but sparrows in black feathers! Cowards, traitors and spies. Spies!"
Why do you hate them so much?
"Ha! A silly question! Some feuds have no beginnings and no ends.
We hate them because they follow orders from the mistress, like dogs. We hate them because they do not pay us tribute. We hate them because they hate us!"
The mistress? Who is that?
"No! No more questions! Go, fetch our treasure or go away!"

Once you return to the Knave with the belt-buckle, he will be willing to answer your questions about a recent theft:

"Well? Do you have our shinies? Speak, spy!"

Did one of you steal a key from the Clockwork Basilica?
"A key? Yes, the Great Prize! The Shiniest Lock-Poker! Our heroic Knight of Marrow breached the gates and claimed it from the clumsy apostles, and our Exarch foes!
The featherless ones squabble over its whereabouts, but they'll never find it. Never!"
Can you tell me where it is?
"No. Only our Duke of Crows knows. You cannot speak to him, crow-friend—not without an escort.
Find the Knight of Marrow. He is our grandest champion! Sleek and strong! Honor him with shinies and sweet meats and he may help."
Where is this Knight of Marrow?
"By a great waterfall, south and east. Swooning like a lovesick dove, no doubt. Even now he builds his lady love a glorious nest, but she is fickle and he is foolish.
Go and talk to him. He needs adventure."
Who are these Exarchs again?

"Enemy crows! The Exarchs of Dross.
They serve the shadow women and try to steal the Great Prize from us. But the Blackfeather Court bows to no one! Our Duke will rend their Queen of Chaff to pieces and we will feast on her entrails!"
Shadow women?
"Shrikes! Weeping, featherless pale-skins that swat and curse us! And their other servants also—black-robed cultists. May they eat sour meat and die!"

Why do you care about this key so much?

"If you see it, you will know. No silver glistens and gleams like the Prize!
The Exarchs and the shadow women want it, but it's ours now. Ours! The Knight of Marrow claimed it for the Court. Ask him."

How did you learn how to talk?

"We crows are clever and wise. Wise! We bend our words into sentences just as you do—except we're better at it because we're smarter than you."

Speak to him again and he'll say:

Knave of Rooks: "Ah, Featherless, you're here! Gate's closed. Closed! Let me help you with that."

"Crow-friend! I am glad I found you. Just let me... catch my breath."
Knave of Rooks? What are you doing here?
"The Duke of Crows sent us far and wide looking for you. My wings ache from the effort! Ache!"
"You wish to use the Gloaming Gates, yes? Well, only crows, and shrikes, and silly cultists can use them. The Mistress keeps them locked."
So you activated it for me?
"Yes! You need a crow's cunning to use these things."
"Now, in you go. I will come with you, to help you find our brave Knight's murderer. You must kill the Shadow of the Clock-god. Kill him, then we'll pick the bones clean!"
What about Luciana?
"The metal woman? Bah! We help her too, but only because we know you'd be cross if we did not. We think she is stupid and ugly, but a friend of our crow-friend is sort of a friend of the Duke's. Sort of."
"Now, no more talking. Into the gate! Go!"

Once on the otherside of the portal, he'll add:

Knave of Rooks: "Hmm. Yes, this is it. Evergloam. Follow me!"

He'll then begin to follow you and give you directions through the daedric plane.

As you move through Nocturnal's plane, the Knave will chatter to you incessantly:

Finally reach the chapel where Proctor Luciana Pullo is held by Nightmaiden Viriana:

Knave of Rooks: "Hmm. Draw your weapons. One of Nocturnal's flock-queens hides in that church. Sour taste. No shiny-bits! Be careful."

Speaking to him after making it through the Evergloam will yield the following conversation:

"Made it, at last. At last! Well done, crow-friend. You move quickly for someone with stubby legs and no wings."
"Now, I will lock this gate with crow-magic. No one will follow you- I swear it on the Duke's fine plumage!"
Are you coming with us to the Cogitum Centralis?
"Oh no. Not yet. Not yet! Our mischief's not done. We still have shadow women to peck, and cultists to chase, and shinies to steal!"
Well, thanks for the help.
"No time for weepy goodbyes, Featherless! Go help your metal-woman, and stop that Shadow! Go!"