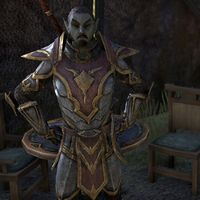 General Yeveth Noramil is a Dark Elf officer of the Ebonheart Pact who can be encountered throughout Eastmarch. Your first opportunity to encounter him is in Windhelm.

He can later be found at the Pact's camp near Honrich Tower, having a conversation with Hlotild the Fox and Captain Vari Warhammer. He will not speak to you here.

A version of General Noramil is also fought during the Circus of Cheerful Slaughter alongside Jorunn the Skald-King and Eyes-of-Steel. This version will be hostile with a health of 31364.

Rigurt the Brash: "Welcome to the bustling city of Windhelm for King Jorunn's amazing Corn-un-licker celebration. We greet the ambassadors of the glorious Dark Elf and Argonian nations with stinky arms and open fish."
Rigurt the Brash: "Let Rigurt be the first to welcome … one moment please. Let me check my notes … Ambassador Flies-of-Steel and Ambassador Normal! Ha!"
General Yeveth Noramil: "How amusing! King Jorunn sent his court jester to receive us. Bravo! Bravo I say!"
Eyes-Of-Steel: "What an … interesting form of greeting. I may never truly learn to understand the dry skins. Perhaps we should head to the inn, Yeveth?"
General Yeveth Noramil: "Yes. Cracking suggestion. Perhaps they'll have something other than … what's that awful Nord beverage … ah, yes. Mead."

Prince Irnskar asked me to speak with you.
"Running errands for the princeling, are you? And I'm not your first. My aides tell me you went to see the lizard before coming to me.
I suppose Irnskar wants to affirm his commitment to the Pact. Wants to drink vile mead and discuss strategy."
The Prince made mistakes. Now he wants to reassure his allies.

Prince Irnskar sent me to talk to you.
"Let me guess. He wants to reassure me of his commitment to the Pact.
What do the Nords call a conniver or a coward? A milk-drinker? Does he think we can idly sip that vile mead and find a strategy to win this war at the bottom of our cups?"
He wants to prove his loyalty to the Pact.
"Talk means nothing. A blood contract, on the other hand, is binding.
Use my dagger, Viper's Strike, on any Stormfists you slay. The blood it absorbs powers its enchantment. Bring it back when the dagger is fully charged."
It absorbs blood?
"To charge its enchantment, yes. If that makes you or the princeling squeamish, however, I perfectly understand."

Returning after recharging the blade:

"Alert the heralds. Irnskar's errand runner has returned."
I charged Viper's Strike for you.
"So you have. I'd applaud, but killing a few Stormfists isn't really that significant of an accomplishment.
However, your efforts on behalf of the princeling prove that he does wish to make amends for his idiotic behavior at Fort Amol."
It would probably help if you stopped calling him "princeling."
"True, but that's not as much fun.
Oh, very well! I shall work with Prince Irnskar. He shall benefit from my considerable knowledge and expertise."

"I'm sure Irnskar has other errands for you to run."

During the council of war:

Thane Oda Wolf-Sister: "Fildgor's at Skuldafn with the Crown of Freydis and the body of Queen Nurnhilde. For what purpose?"
Prince Irnskar: "The Orcthane plans to use them at the dragonshrine to usurp my father's throne."
General Yeveth Noramil: "A necromantic ritual, perhaps?"
Eyes-of-Steel: "The Crown is a powerful artifact. I shudder to think what the Orcthane can accomplish with it."
Thane Harvald: "I don't like the idea of that bastard using our fabled crown. And I hate that he has our beloved queen's body."
Prince Irnskar: "Father! You honor us! I'm glad to see you up and around."
Jorunn the Skald-King: "My brother seeks to pull my sister's soul from Sovngarde. The Crown of Freydis will see the soul, not the man."
General Yeveth Noramil: "It's good to see you well, Jorunn. We've been discussing how to approach Skuldafn."
Thane Jeggi Gap-Tooth: "Yes, yes. We discuss and we strategize while Fildgor digs in and strengthens his defenses."
Thane Oda Wolf-Sister: "So, have we come to any conclusions?"
Eyes-of-Steel: "The Stormfists have fortified the primary path to the dragonshrine. A frontal assault would take time that we may not have."
Jorunn the Skald-King: "Time is a luxury we don't possess. If Fildgor completes this ritual, all is lost."
General Yeveth Noramil: "That's why you wanted to see those scouting reports! You think there's another way into Skuldafn."
Jorunn the Skald-King: "There is always another way. Champion, may we speak?"

"The time has come to crush Fildgor and the Stormfist Brigade once and for all."
King Jorunn suggested I talk to you.
"Ah, yes. The scouting reports. He wants you to sneak into Skuldafn while we distract the bulk of the Orcthane's army.
Skuldafn is special to the Nords. Jorunn always planned to hold the moot there. But then Fildgor moved in."
Why did Fildgor take control of Skuldafn?
"We think Fildgor wants to use the dragonshrine to steal Queen Nurnhilde's soul and force the Crown of Freydis to recognize him as the true ruler of Skyrim.
Meet Scout Snowhunter to the north and east. He'll show you how to reach Skuldafn."
I'll look for Scout Snowhunter. 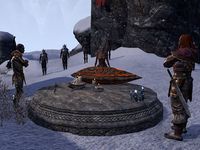 He gathers with King Jorunn and Eyes-of-Steel for the moot.

Jorunn the Skald-King: "Esteemed allies. I stand before my ancestors, at this holy dragonshrine, to seal our pact for the greater good."
Eyes-of-Steel: "I stand on this mountain to proclaim how far the Argonians have come from the swamps of Black Marsh. In the name of my people, I add my voice to form this Ebonheart Pact."
General Yeveth Noramil: "I represent the Dunmer and the Tribunal. I stand on this frigid rock to affirm our place in the Ebonheart Pact. I fervently hope we can move this along, because it's freezing up here."
Jorunn the Skald-King: "The Nords offer the Crown of Freydis. This symbol of power and wisdom provides the Pact with the strength and authority of our Nord ancestors."
General Yeveth Noramil: "The Dunmer offer the Judgement of Veloth, an artifact of ancient magic. This provides the Pact with our skills and the blessing of the Tribunal."
Eyes-of-Steel: "The Argonians offer the Mnemic Egg, sacred symbol of birth and life, thus granting our wisdom and memories of the Hist to the Pact. With these offerings, the Pact is sealed. Let our nations become one."
General Yeveth Noramil: "Further, the Dunmer call for a single leader to hold this pact together. We believe Skald-King Jorunn is the one to lead us. We believe Skald-King Jorunn is the one to lead us!"
Jorunn the Skald-King: "Let our enemies tremble at our combined might. I accept the role of High King of the Ebonheart Pact. We have much to discuss here. Please, Champion, return to Jorunn's Stand and tell my son what has transpired."

"Yes, yes, hooray for the Pact. Can we go back where it's warm now? I'm freezing out here!"