Sheogorath's book is supposed to lead me to the next trial, the "Circus of Cheerful Slaughter." Let's see what the Mad God has planned for me this time.

At Mages Guild Rank 3, traveling near any Guildhall will cause a projection of Arch-Mage Shalidor to appear before you and yell "Ho there! Adept!". He will say that Valaste has translated the tome you recovered during Simply Misplaced, Circus of Cheerful Slaughter. They've run into a major problem, though: neither Valaste nor Shalidor can make sense of the translation. You should go offer your assistance, he says. Valaste will be in a major city in the next zone of your Alliance: Marbruk (Greenshade) for the Aldmeri Dominion, Shornhelm (Rivenspire) for the Daggerfall Covenant, or Stormhold (Shadowfen) for the Ebonheart Pact. 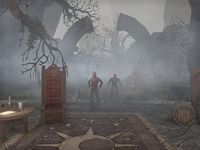 Sheogorath's in the Circus

Make your way to Valaste, who is waiting for you. She is frustrated beyond measure by the incomprehensible book, but is willing to let you try. Circus of Cheerful Slaughter lies nearby, so read it. You'll get a glimpse of the text (which is indeed confusing) before butterflies surround you and you are transported to another of Sheogorath's realms.

You'll reappear in a misty place, with Sheogorath himself ahead of you. Talk to him, and he will say "Welcome, welcome, to the Circus of Cheerful Slaughter! Step right up, my mortal friend. The show is about to begin, and you're the star!" Ask him what he means by 'show', and he will say that it's his own play, The Folly of Isolation. Apparently it's a tragic comedy, a 'tromedy'. If you entertain him, he will give you the next tome.

His play is about the Alliance War, and the Mages Guild trying to isolate itself from the conflict. Your job is to help the Guild stand alone in the conflict by killing the Alliance members, right up to the leaders! Sheogorath will warn you that you have to wait for your cues, though. Nobody dies unless he says so. 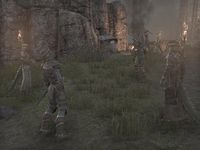 Ebonheart Pact soldiers before the brawl

After you say goodbye, Sheogorath will tell you to meet him in "the bustling Pact town of Heartholdhelm". The first part of the play is on the table near Sheogorath if you care to read it. Head down the misty path (which runs between giant mushrooms characteristic of Morrowind), and you'll run across the ghostly figures of theater goers lining the path before going through an archway and finding Sheogorath. He'll ask you if you're ready. Answer in the affirmative and he will go on to explain that the Ebonheart Pact features in the opening act; an alliance of races that are now at peace but have historically been at war. Thus, Sheogorath has written himself a "small but pivotal" part, to give them a push. He will demonstrate by walking over to the gathered Pact members and shouting, "Hey! You hate each other, remember?" A Pact member will respond, "Oh yeah! Get 'em!" and the soldiers will start brawling.

Clean up any remaining enemies (you'll have to run around a bit to find them all) and Sheogorath will say he hears someone approaching. Jorunn the Skald-King will arrive, asking why everyone was fighting. The Mad God will immediately lay the blame on the Mages Guild, and Jorunn and his lieutenants, Eyes-of-Steel and General Noramil, will attack you.

After the fight, you'll find The Folly of Isolation, Part 3 near some cages to the northeast. Continue through the gate to the north. Along the way to Skyroot Hearth, the Aldmeri Dominion town, you'll see illusions concerning Valaste's history.

The first scene is to the right as you pass under the arch. Two fellow mer stand before a slumped Valaste, bullying her:

Ondendil: "You'll never make a living reading all day. You need to earn some coin, Valaste!"
Malanie: "Even Mages take their noses out of their books once in a while. You just can't stand to be around people! Pathetic." 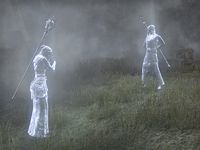 Valaste is recognized by Guildmaster Vanus

The next scene is a little further on, also to the right:

Vanus Galerion: "You have a rare mind, Valaste. Not once in a century is a Mer with your talent born. We have accepted your application to join our august and storied Mages Guild."
Valaste: "This is the proudest day of my life, Guildmaster. Thank you."

Behind Vanus is a difficult-to-see house, which contains Part 6. Return to the path. The last scene is of Valaste standing alone, poring over a tome, presumably the very same Circus of Cheerful Slaughter that gave her so much trouble:

Valaste: "Damn the Mad God! Why can't I make sense of this text! I'm such an idiot!"

Beyond is Skyroot Hearth. The next act features Queen Ayrenn addressing some of your Mages Guild peers, who cower before her.

"Here, let me show you the path to exile!"

Queen Ayrenn: "The Mages Guild cannot turn on the Dominion so easily. You are a part of this world, like it or not."
Mages Guild Wizard: "My Queen, you don't understand. The Guild does not belong to any alliance. We merely wish to study in peace and solitude."
Sheogorath: "Hey! Quiet down front! I am trying to watch the queen's speech!"
Queen Ayrenn: "Either you're with the Dominion or against us. You want to be removed from this world? Fine. I'll do it for you. "

Ayrenn will then shock one of the cowering mages, shooting him full of lightning until he collapses, dead. She turns to the next and repeats her action.

Queen Ayrenn: "Here, let me show you the path to exile!"

The third and last goes down as well under Ayrenn's magic.

Queen Ayrenn: "You can't ignore the world around you!"
Sheogorath: "Hey, Queenie! You missed a mage! This one is a member of the guild, too."
Ayrenn: "Ah. Good catch, jester. Soldiers! Give this Mage the gift of exile."

The assembled Dominion soldiers now attack. Once they are all dead, Queen Ayrenn will exclaim, "Such impertinence! Razum-dar, Captain Odreth! Take care of this serf." They now attack from their position behind the Queen. When Razum-dar goes down (and he usually will go first since he charges at you while Odreth hangs back, shooting his bow), you'll hear Ayrenn say, "You killed my favorite cat! Such a loyal pet." When both are dead, she will yell, "Looks like I'll have to handle this myself. You face Ayrenn Arana Aldmeri! In her full glory!" and attack. Kill her and Sheogorath will announce the end of the scene. Your quest will update to meet him in Daggerwaymore, but there's some interesting things remaining in Skyroot Hearth. 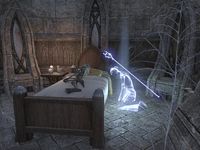 The first building to the right is a house, and contains an illusion of Valaste addressing a skeleton on a bed:

Valaste: "Mother! You left me.... I'm all alone. The other students, the other Mages, they all hate me. You were the only one.... And now you're gone."

The south building has a scene with Shalidor addressing two Adepts:

Arch-Mage Shalidor: "The world is a cruel place, my assistants. Mages are envied for their power, and reviled for using it. We must have a place where we can study in seclusion. A place where all Mages can be safe."

Finally, the last building has Part 7 on the bar, along with a few bottles you can take for a chance at Aldmeri Dominion beverages.

Continue towards Daggerwaymore. This path offers glimpses at Shalidor's life. The first scene is directly on the path and is of Shalidor alone:

Arch-Mage Shalidor: "Ulfsild, I did it! I have created a sanctuary, a retreat that will endure for eons! I shall call it... Eyevea!"

The next is by a brazier, also on the path, and reveals the Mad God might not have taken Eyevea at random:

Arch-Mage Shalidor: "Sheogorath! You bastard! The Folium Discognitum wasn't worth an island! I'll get Eyevea back, even if it takes three lifetimes!"

Part 8 is next to the brazier. The third scene is in a camp to the southeast of the brazier, and features an angry Shalidor: 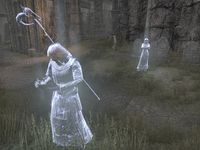 Continue down the path and through a cemetery gate, and you'll find Shalidor and a frustrated Ulfsild:

Ulfsild: "You didn't come home last night. I waited all night for you. Have you been working this entire time? Shalidor! Eyevea is lost... you're obsessed! Can you even hear me? I can't do this anymore. You love your spells and scrolls more than you love me. I'm leaving you. Can you hear me now? Goodbye... you stupid old fool."

Arch-Mage Shalidor: "Ulfie... my love? I swear I just heard you. Where did you go?"

Continue through the gate to Daggerwaymore, which is a parody of a Covenant town. Sheogorath once again waits for his 'star' to arrive. He's sad that the show is almost over, but he'll remind you the principle of storytelling: show, don't tell...

Sheogorath will set the scene:

Sheogorath: "Stage left, we have the founder of the Mages Guild, Vanus! Stage right, we have your old, old, old, old, old friend, Archmage Shalidor! And backstage we have Valaste, your new friend and confidant in the Mages Guild! But what's this? Why, it's King Emeric and his friends from the Daggerfall Covenant! No doubt he's got kind words to share. Take it away, Your Highness!"
High King Emeric: "For perpetuating the use of magic, we hereby burn you at the stake. Let your corruption be gone from this land once and for all!"

Vanus, Shalidor and Valaste will be surrounded by flames, and enemies will appear by each of them: three Daggerfall Covenant soldiers behind Vanus, King Kurog gro-Orsinium near Shalidor and High King Fahara'jad next to Valaste.

Sheogorath: "Seems like nobody wants you around. Hah! So, this is the final scene. Save your friends. Then I'll give you me book."

Kill each enemy in any order you so desire. Each of your allies will have something to say after you rescue them: 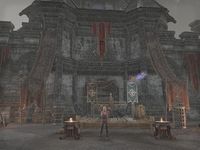 Arch-Mage Shalidor: "I would have given up the island for her. She never gave me the chance to decide.... My wife.... "

Valaste: "Books are my only friends... what happens when even books turn on me...?"

After this, you'll have to kill High King Emeric. When he dies, Sheogorath will reappear near the next book (behind where Valaste was), cheering and clapping. Before you go talk to him, note that the final part of the play is in the second house on the left, and a brief but disturbing scene concerning Valaste is in the house on the right:

Sheogorath will say your performance was 'uninspired', but will give you the tome regardless. After you say goodbye, he will dissolve into nothingness, as is his wont, and you will be free to take the book, called Robier's Vegetable Garden. It will transport you back to Tamriel after you have read it.

Valaste will give you the Thespian's Ring and a leveled amount of gold.