I have entered the Blessed Crucible to test my strength and take the Brimstone Crown. Talres Voren has financially backed my bid to become champion with the promise of riches and rewards. 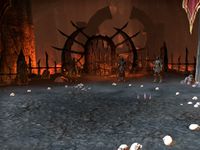 You will begin by speaking to Talres Voren at the frosty entrance to the Crucible. He's looking to bet on some fights in the arena, and you look like the perfect candidate to defeat the competitors within. He promises to share his winnings with you if you win. As you approach the gates to the crucible, Talren mentions that he's been banned from the Crucible. You, however, are a fresh face in the competition, and should have no problem entering the ring. The bouncer at the gate sizes you up and scoffs at Talren. He wants to test you before letting you in. To this end, he sics the six durzogs accompanying him on you. When you've killed the animals, he opens the gate to let you in.

Entering the courtyard, it becomes clear that some people here have bad blood with Talren. He owes some money, which encourages all the gladiators in the courtyard to attack you. Alternatively, you can walk straight up to Grunt the Clever, giant and doorman for the crucible. He'll let you in if you can kill everyone else in the courtyard, so it doesn't really matter whether you approach Grunt first or let the other gladiators take their anger towards Talren out on you. Kill the gladiators and talk to Grunt. He thinks you might be crucible material, and wants you to fight him to prove your worth. Once Grunt is dead, enter The Pit and head down onto the little island surrounded by lava.

You will face three waves of gladiators before fighting the Pit's champions: The Pack. The Pack consists of four people: Kayd at-Sal, Snagg gro-Mashul, Nusana and Dynus Aralas, who happens to be the announcer for the previous fights. When the members of the Pack reach about 50% health, they will transform into werewolves. Talren is watching the fight, and will throw down health potions for you to use. After the Pack is defeated, the crowd starts booing, and you're approached by two enforcers as you try to leave the ring. They don't abide cheating in the crucible, and Talren has screwed you all by attempting to help from the sidelines.

Fight your way through the Blessed Crucible. Eventually, you'll reach a large, snowy courtyard where the Beast Master is hosting her Grand Melee. You may notice Talren, tied up on the ground near the Beast Master. There are groups consisting of several races. You will need to defeat them to win the Grand Melee. After you've done so, the Beast Master unveils her next act: you're going to be fighting abominable creatures from across the land. Incineration Beetles are up first, and come out of the gate on the left-hand side. They're three large shalks. Stay out of the fire they set on the ground and you'll be fine. Out of the right gate comes Stinger, a giant scorpion. Avoid the poison that spouts up from the earth when it plants the tip of its tail in the ground. The final beast is the Troll King, who violently bursts out of the center gate and crushes the Beast Master.

Kill the Troll King and untie Talren, who is fortunately unhurt. He thanks you for saving him, and tells you about the reigning Champion of the Crucible: The Lava Queen. She's held her position for over three hundred years. You need to get out of here, and the only way is forward, so you'll need to win the crucible if you want to leave. If you take the Brimstone Crown from the Lava Queen, you will become the new Champion, and the guards will have to obey you.

Make your way through the crucible and face the Lava Queen. Once she's dead, speak with Talren, who is amazed by your success. He'll reward you for the astounding feat of claiming the Brimstone Crown.

This Elder Scrolls Online-related article is a stub. You can help by expanding it.
Retrieved from "https://en.uesp.net/w/index.php?title=Online:Fires_of_Battle&oldid=2079581"
Last edited on 28 December 2019, at 20:21