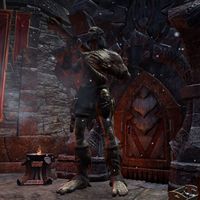 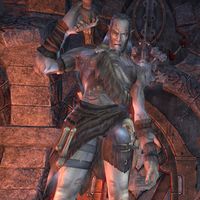 Grunt the Clever is a giant found in the Blessed Crucible. He acts as the crucible's doorman and can speak limited Tamrielic. You will have to fight him to prove your worth.

As a boss type enemy, Grunt the Clever is immune to all forms of crowd control effects.

Kick
A basic melee attack that does moderate physical damage.
Obliterate
The boss smashes his club on the ground dealing high physical damage and knocking targets back as indicated by a large red cone. Do note that the damage area does not exactly match up with the cone and you can still get hit even if you stand behind the boss.
Sweep
The boss swings his club releasing three shockwaves in front of itself dealing moderate physical damage to all players hit.
Intimidating Roar
The boss fears all players, this can be broken free from.

When you first encounter him, the door to the inside of the arena will be locked. You must speak to Grunt.

"You not allowed in. Go 'way."
Why not?
"Too crowded. Only gots room for one group. Too many groups out here. You beat them, maybe you go in."
Simple enough.

You will then have to have to kill every other gladiator in the courtyard. Once you've done so, you can talk to him again.

"You tough. Maybe tough enough for Crucible. Maybe not."
How can I prove I'm tough enough?
"Maybe you fight me!"
If you insist.

He will then enter combat and shout:

Grunt the Clever: "I smash you to bits!"