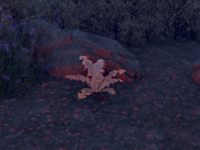 A Crimson Nirnroot plant glowing in the darkness of Blackreach

Crimson Nirnroot is a red plant and alchemy reagent which is always found near water sources. It can only be found growing in Blackreach caverns, such as Greymoor Caverns

and Mzark Cavern. It produces a strong chiming sound to anyone nearby.

This chart lists only combinations in which two or more of Crimson Nirnroot's effects are present. 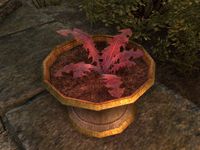 Crimson Nirnroot, seen during The Staff of Magnus
Retrieved from "https://en.uesp.net/w/index.php?title=Online:Crimson_Nirnroot&oldid=2209583"
Last edited on 13 September 2020, at 06:01