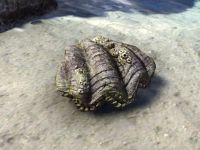 Clam Gall is an alchemy ingredient which can be found on Summerset Isle. They are gathered from Giant Clams, a node type only found on the beach. They are a common reward in Shell Troves, containers that spawn from completing Abyssal Geysers in Summerset. They may also be found inside Pyandonean Bottles, which can be obtained through fishing.

This chart lists only combinations in which two or more of Clam Gall's effects are present.

Clam Gall is also used in one Provisioning recipe:

It was later changed to:
Before settling on its current effects.