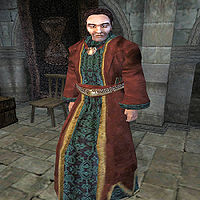 Somutis Vunnis is an Imperial priest serving the Imperial Cult at Moonmoth Legion Fort near Balmora. There he sells potions, ingredients, and spells to all who need them. If you speak to him about "essential supplies" after talking with Caius Cosades, he will give you a selection of potions for free, including two potions of cure common disease, two potions of cure blight disease, a cheap potion of fortify health, a cheap fortify strength potion, and a cheap potion of fortify speed.

Somutis has the following spells available for sale: