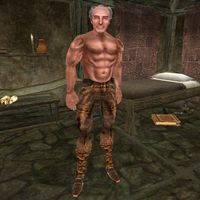 Caius Cosades is an Imperial monk and Grand Spymaster of the Blades in Vvardenfell. He resides at his home in Balmora, with an admitted skooma problem. Though he appears to be just an old man with a fondness for drink and narcotics, regular patrons of the South Wall Cornerclub have noticed that he holds his skooma better than even a Khajiit would. It has also been observed that people who judged him only on his appearance "aren't with us anymore". During the final conversation with him, he mentions his superiors being concerned about his "sugar". Nevertheless, there is an impressive amount of skooma, moon sugar, and paraphernalia in his house (and on his person). He wears cheap common pants with matching shoes and a belt. He also carries five samples of moon sugar.

As Grand Spymaster of the Blades, Caius Cosades is the most senior person in Vvardenfell in this organization, and will allow fellow members to use his bed for sleeping. After giving you the quest Mehra Milo and the Lost Prophecies, Caius is recalled to the Imperial City and permanently disappears from the game.

He is a major trainer in Hand-to-hand, Speechcraft, and Unarmored.

Caius Cosades is an important Main Quest character, which means he has a lot of unique dialogue regarding it. In addition, he also offers a great deal of information on the different factions in Morrowind:

I canvassed my informants for possible treatments, just in case you contracted the disease during your mission. I learned from Fast Eddie that your best chance of getting cured is Divayth Fyr, an ancient Telvanni wizard who runs a Corprusarium for victims of the disease.