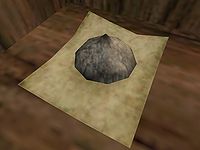 "Ash salts are hard grey crystals formed from the ash deposited by ash storms in the ash wastes and lava fields. Ash salts are most often collected from the remains of creatures like the ash slave, the ash ghoul, and ash zombie."

Ash salts can be purchased from the following restocking vendors:

The largest single source of free ash salts by far is the Urshilaku Burial Caverns. All of the mummies buried here have a sample, along with bonemeal. There are 34 of them in total. No other single location has more than 2 guaranteed samples. Another good place to look is in ancestral tombs. Most tombs have from 1-4 "cloth sacks", each of which has an 60% chance of containing ash salts. Ash salts are also often left as offerings around the burials in tombs.