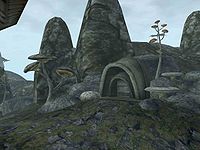 Ashmelech is the isolated home of the Aundae vampire clan. It is located on a small island just southwest of the large island containing the village of Dagon Fel. It is home to Dhaunayne Aundae and her clan of vampires (of these, only two others are of note: Gladroon, who sells armor and weapons, and Mororurg, who sells alchemy supplies). When you complete the Aundae vampire quests, you will be given the Aundae Amulet which can be used for instant transport back to the stronghold.

When you enter the tomb, you will be greeted with a sloping hallway leading downwards. Turning left will set you on a collision course with the Altmer vampire, Iroroon.

Immediately to the left in that passage is a trapped door. Behind that door is the alchemist, Gladroon and a Redguard Cattle. Within this room is Gladroon's workspace (behind the screen in front of you when you first enter) with a furnace, and a door with a level 10 lock.

Behind the locked door is a bedroll and a vampire. It's Jeanciele Macile, a Breton Witchhunter who appears to have been imprisoned by the Clan, presumably while doing as his profession suggests. He must have been turned during his imprisonment, as he is a vampire, yet he is not a member of the Aundae Clan and waits behind a locked door. If you are of the Aundae Clan, Macile will be docile and say "Get away from me, vampire!" when you attempt to speak with him. If you are of a different Clan, he will attack you. He wears a common shirt with matching common pants and common shoes, and carries a long bow in his inventory. He knows the spells Vampire Touch and Summon Ancestral Ghost.

There is an alcove just past the locked door with 2 chests: chest with 25 gold inside bearing a level 10 lock, and a chest with a random low-level weapon inside (also with a level 10 lock). There is also plenty of loot in Gladroon's workspace. On the table facing the prisoner's cell is a steel staff of war, an apprentice's armorer hammer, a single pair of repair prongs, and Gladroon's chest with a level 20 lock. To the left of the table on the ground are two more chests with level 30 locks. All three chests in this area (both the ones on the floor and the small purple one on the table) contain Gladroon's wares.

Taking the path east from Gladroon's furnace will lead you down a hallway where you'll pass by another Redguard Cattle. This leads you to make a choice: Turn left and enter the door with a level 15 lock, or turn right and continue down the hall to another forked path.
Behind the door to your left is another hallway. Turning right leads you to a dead-end room with a Redguard Cattle and Lorurmend, an Altmer witch. Inside the room with Lorurmend is a table with miscellaneous junk and an iron tanto on it, and an unlocked empty chest. Turning left into the hallway leads to another choice in paths.

To your right is the hallway with the door that leads to Gladroon's workspace. You're close to the entrance of the tomb. To your immediate left is a level 35 locked door, and just beyond the locked door is another door: this one is unlocked. Entering either of the left doors leads you to the hallway you could have gone through instead of entering Lorurmend's room. Both the locked door and the unlocked one lead to the same hall. There is, however, a bit of a fork in the path here, because as you might have already guessed, Ashmelech is a winding mess.

The path behind the locked door leads to a hall with a male Dunmer Cattle standing in the middle of it. You can also turn right in that hallway very early on and enter the hallway closest to the unlocked door. Alternatively, you could turn left at either door you entered through and go down a hallway where a Redguard Cattle is standing. This path forces you to make a right turn, wherein you will have looped back around to the entrance area. Just down this path and to the left is the exit.

Since you want to keep exploring, you'll want to take one of the other two paths. Turning left in either of the two paths you take will, if you're not paying attention, make you fall into a pit that leads to the very heart of Ashmelech. Behind you is the throne room, where the Vampire Ancient of the Aundae Clan, Dhaunayne Aundae, sits upon her throne, seated above a corral full of captives foolish enough to enter her domain. Aside from Dhaunayne's prisoners, there is one Cattle in this room, next to the throne and outside the corral. Those among her captives include two witchhunters: the Nord Odmi and the Imperial Ticemius Conciatius, as well as Redguard pilgrim Iminda and Dunmer sorcerer Toranu Rothalnim.

Speaking with Toranu as a vampire will prompt her to attack you: "Vampire! I curse you, in Almsivi's name, and in the name of all the ancestors. Return to the foul corruption from which you came! Die, fiend!"

Toranu wears a common robe with matching shoes and wields a silver sparkblade during melee combat. She knows the spells Summon Bonewalker, Dire Weakness to Shock, Detect Creature, Sotha's Mirror and Vivec's Feast, among others. Despite not being a vampire, she utters a sound upon death that is identical to one that female Dunmer Vampires make.

Exiting the throne room through the hall leads to yet another bend. Going left will lead you to a room with a chest and a podium, where the vampire Tarerane lies in wait. The chest behind the podium has a level 10 lock and is empty. Taking the hall to the right leads you to a trapped door, which leads to a winding upward slope into yet another fork in the road. You can either turn left and head down the steep downward path or go straight.

There are potions on the west side of the room to loot. Among those are two Standard Fortify Magicka potions, two Cheap Potions of Fire Shield, three Exclusive Fire Resistance, two Bargain Fortify Personality, two Quality Fortify Willpower, one Bargain Restore Health, two Cheap Potion of Fortify Health, one Exclusive Fortify Endurance and one Standard Fortify Intelligence. There's also a copy of A Game at Dinner on the table in the center of the room. There are also three chests in this room. There's a worn chest with 25 gold in it, an empty wooden chest and an empty trapped chest.

Aside from loot, there are two other points of interest in this room: The hallways. There's one on the left side of the room (aside from the one you just came from) and one just past that. The hallway closest to the path to the throne room leads to the pit you probably fell down earlier, and the other hallway leads to a level 25 locked door. Behind that door is the path you could have gone down instead of falling down the pit. Turn right and you'll see that Dunmer Cattle we talked about earlier. There's a chest to his left that has nothing in it.

Continue to the right of the slave and you'll encounter Mirkrand in the corner as you descend the hall. This particular hallway is very long, and leads back to the fork in the path where we chose to say hello to Mororurg and Moranarg. We've officially come full circle and explored the whole of Ashmelech, so it would be worth your while to ensure you've gotten what you're looking for from the place and leave. That is, unless you plan on joining Clan Aundae... 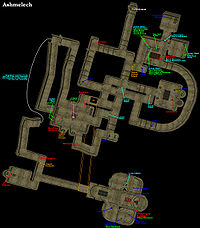