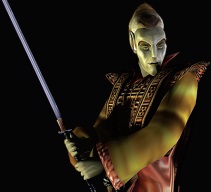 High Elves, or Altmer, are the tall, golden-skinned race, hailing from Summerset Isle. They are also known as High Elves by the denizens of Tamriel. In the Empire, "High" is often understood to mean proud or snobbish, and as High Elves generally personify these characteristics, the "lesser races" generally resent them. High Elves live two to three times as long as humans; with a 200-year-old High Elf being old and a 300-year-old High Elf being very, very old. High Elves consider themselves to be the most civilized culture of Tamriel; the common tongue of the continent is based on Altmer speech and writing, and most of the Empire's arts, crafts, laws, and sciences are derived from Altmer traditions.

High Elves are the most strongly-gifted in the arcane arts of all the races, and they are very resistant to diseases. However, they are also somewhat vulnerable to magicka, fire, frost, and shock, which makes them very weak against their strongest point - magic. They are among the longest living and most intelligent races of Tamriel, and they often become powerful magic users due to both their magical affinity and the many years they may devote to their studies.

While the Breton is marginally better for protective magic, High Elves are also advantageous for magic. You receive much more magicka than the Breton (the only other race with a magicka bonus). This may be the foremost reason to play a High Elf, because with that much magicka one does not worry as much about the more expensive spells. Particularly greedy players can also choose a birthsign with a Fortify Maximum Magicka Ability so they would almost never encounter a magicka shortage, but they would have to endure the extensive resting needed to regain it - though Alchemy provides a means of restoring it more quickly with potions, and High Elves have a bonus to their starting skill value. The Atronach birthsign not only increases the magicka pool the most, it also partially negates the magic weaknesses with its 50% Spell Absorption. High Elves are also the only race with an Enchant bonus, which ironically does not use magicka. Consider this if you plan to play an enchanter, as Enchant is a difficult skill to raise and even a small starting bonus is helpful.

The dilemma one faces with High Elves is the many weaknesses they have. Experienced players should be able to navigate around this kind of issue, but early in the game you will be afflicted with a severe handicap against any characters who will use magic. For this reason, you may want to design your character to keep their distance in battle. Females have a certain advantage there, with the increased speed. Using this method, you could attempt playing a magical sniper, having high speed to retreat (or at least significant feather/burden effects) while using Destruction spells to attack your opponent. Of course, Morrowind is open enough to allow you plenty of options, so anything you can implement to keep yourself safe from magic will be ideal: Reflect, Spell Absorption, Paralyze, Calm, Demoralize, Speed Fortification/Damage/Drain, Silence or Sound. These can be particularly viable options for High Elf spellcasters as they have enough magicka to cast both these 'protective' spells for their own safety as well as using ranged spells from the Schools of Destruction and Mysticism against their enemies.

In a sense, High Elves are the embodiment of the Apprentice birthsign, in that they gain larger magicka reserves but pay for it with increased susceptibility (and of course this is doubled again for a High Elf that is born under the Apprentice).