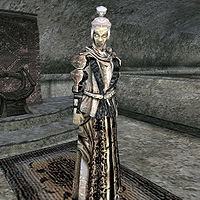 Dhaunayne Aundae is an Altmer vampire nightblade residing in the depths of Ashmelech. She is the leader of the Aundae Clan of vampires. If you are infected with Porphyric Hemophilia by a member of the Aundae Clan, she will be your quest-giver. Among the quests given, Dhaunayne will ask you to find out what happened to her son, whom she had prior to becoming a vampire. She gives you a family signet ring with the Aundae crest to aid you in your search. As it turns out, there is one other person with such a ring. Sinyaramen, located at the Gateway Inn in Sadrith Mora, will tell you that Vilandon, Aundae's son, was his grandfather. Vilandon had become a vampire hunter, believing his mother had been killed by a vampire.

"What is it, little monster? How does an abomination such as you plan to serve me?"
plan to serve me
"You? An unfortunate accident perpetrated by one of my kind? Hmmm... you are expendable enough, so may be of use. I have some questions about my past I need answered, and you might be fit to get this information. Answers about my family."
about my family
"Yes, Fresh Blood, I once had a family. We were high born, even among the Altmer, and I lived with my husband and young son until my Rebirth. My sire killed my former husband, but my son Vilandon was allowed to live. I am curious what became of the boy, although he has likely gone the way of all mortals now. Still, it would be amusing to know his fate."

family crest
"Any Altmer who has met one of my kin should recognize the seal on that ring."
Vilandon
"He was my son. What has become of him, I do not know."
about my family
"There is no more you need to know about this right now."

Returning after learning about her family:

"You try my patience, accident."
about my family
"A vampire hunter? And not a very good one, apparently. Interesting. Family is an odd thing, is it not? Defined by blood, separated by blood, joined by blood. In the end, it is all just blood. Now, let us put this matter to rest. Find this Kjeld. Kill him."
Kjeld
"He is of the Quarra Clan, and resides in Druscashti. He is powerful, and will be well guarded, but such is your lot. Go."
about my family
"There is no more to say about this matter."

Kjeld
"Well done, new meat. You have some potential, perhaps. This matter is now settled. You have access to the clan services."

"Do you plan to serve me again, Darkling?"
plan to serve me
"You try my patience, but I suppose I can make further use of you. You are expendable after all. I wish for you to take care of a bothersome vampire hunter."
vampire hunter
"Yes, he came nosing about our lair some weeks ago. Some of my spies have tracked him to the city of Ald'ruhn. It is not enough for you to kill him, though. I want him killed in broad daylight, with plenty of folk there to see his death. Let it serve as an example for all who would dare intrude in Ashmelech."

"I have no more to say on this topic, new blood. Begone."

Returning to her and not killing the vampire hunter exactly as she's ordered:

vampire hunter
"You've killed him, but not as you were ordered! Leave my presence, fool."

Returning to her after doing exactly as she's ordered:

vampire hunter
"You've gotten rid of him, and in full view of the local populace? Well done, little abomination! For your efforts, take this. It is an amulet that will allow you to return to Ashmelech when in need. It is possible I will have future rewards for you, should you be able to rid this world of a large number of the Berne and Quarra clan. Now leave me."
future rewards
"I have no rewards for you yet, yearling."

Returning after killing enough vampires from the opposing Clans:

future rewards
"You have done well in ridding the world of many of our opposing clans. As a final gift to you, I will allow you the use of the cattle here in Ashmelech to feed. Feed, but do not kill them. This would displease me greatly."
future rewards
"There is nothing further you may do for me."

She also has dialogue that is unique to the Aundae Clan, but not exclusive to her, when spoken to about the following topics: Berne, Aundae, Quarra, and our dark powers. She will not speak to members of the Quarra or Berne clans.