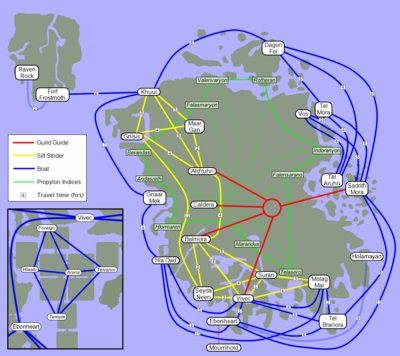 Vvardenfell is a vast landscape. There is even a quest whose sole objective is to walk from one side of the map to the other without talking to anyone, and this is likely to be an undertaking of half an hour or more, depending on how fast you can move. Luckily, most of the time you have no such issue with conversation, and are thus free to engage one of Vvardenfell's manifold quick-transport options. Note that non-magical transport takes time: although you may not realize it, a few game-hours will pass between, for example, boarding the Silt Strider in Gnisis, and getting off in Ald'ruhn. This time in transit counts as resting to restore health, magicka, and fatigue. For further information visit the Morrowind Maps page.

Followers will accompany you on commercial forms of transportation (silt striders, boats, gondolas, and guild guides). They will not accompany you if you cast Recall, Divine, or Almisivi Intervention or use a propylon chamber. 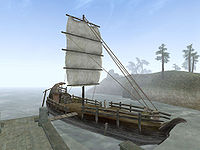 The Chun-Ook, anchored at Ebonheart

Boat transport is available to most of the coastal cities on Vvardenfell. There are various types of seagoing transports, the most common being a large single-masted three-deck ship, or the smaller open boats found in the poorer settlements.

Boat services are available from the following cities:

* These ships only offer travel services about half way through main quest. 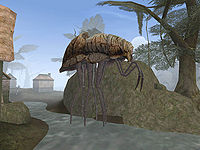 The Silt Strider at Seyda Neen

Silt Striders are used primarily as a means of civilian transport in an elaborate network stretching between various cities on the island of Vvardenfell in Morrowind. Having no natural cavities in which passengers may safely repose, a compartment is hollowed from the creature's chitinous shell, wherein both passengers and their luggage are loaded. The Silt Strider itself is then moved by direct manipulation of exposed organs and tissues by its driver, commonly known as a caravaner.

Apart from the transportation of passengers, Silt Striders are also employed in the shipment of trade goods. To that end, certain cities—most notably Gnisis and Molag Mar—have constructed Silt Strider docks to aid in the loading and unloading of cargo.

Desiccated remains of Silt Striders can be found in various parts of the Ashlands.

Most commonly employed in the southern and western parts of Vvardenfell, Silt Striders travel inland in the Ascadian Isles, West Gash, and Ashlands regions. Dependent upon the desired destination, passage to the following cities may be obtained for a set price from the point of origin. Each Silt Strider has a driver, or caravaner, that navigates the Silt Strider to its destination. All caravaners in Morrowind are Dark Elves.

Caravaners are often good first resources of information about their cities as well. Be sure you explore all topics of conversation with them. Additionally, increasing their disposition towards you will reduce travel costs from their station to others. You can bribe them for a guaranteed disposition increase, but this partially offsets the gains of lower fares.

The gondoliers in the holy city of Vivec transport customers from one canton to the next for nominal fees. Additionally, they carry one of the most unique hats in Vvardenfell. It can only be gained by killing the person wearing it, so don't try if you feel you need them to navigate the city.

The gondolas are available from the following cantons:

Each branch of the Mages Guild maintains a Guild Guide, an expert in Mysticism who maintains magical contact with her counterparts in the other guilds and, for a fee, will instantly teleport individuals between guild locations. Guild Guides are usually identified standing near an empty platform or room at the rear of the guild, and will offer transport when asked about Travel.

The guides' prices vary according to their disposition. This can become the cheapest mode of transportation, perhaps because you are teleported rather than transported (boats and silt striders take time to arrive at their destination). For this reason, you do not "rest" while traveling and regain health or magicka as you do by boat or strider.

Guild Guide services are available at each of the five Mages Guild halls, and each guide can transport you to any of the other four.

Be aware that due to the Mages Guild's hatred of House Telvanni, if you join the Telvanni and rise high enough in their ranks you may reach a point at which the guild guide's dispositions towards you are so low that they refuse to offer their travel service. Raising their disposition from this low level may be difficult if your character does not have a high Speechcraft skill.

If you ever find yourself in serious trouble, you should have listened to the advice of seasoned adventurers: always carry some Divine Intervention or Almsivi Intervention scrolls with you. These effects transport you away from your impending moment of doom to the safety of an Imperial Cult shrine or the nearest Tribunal Temple, respectively. For further information visit the Almsivi Intervention Map and Divine Intervention Map. If you find that you use these effects frequently and/or don't want to invest money in buying lots of scrolls, you can get them as normal spells or enchanted items.

This can also be used as free, instantaneous transportation for frugal people and to carry bulk amounts of loot to a safe, nearby city. The transportation ignores overencumbrance, but once transported, you'd be stuck there until you drop items or otherwise make your encumbrance manageable.

The expansions add three more locations. Fort Frostmoth, an Imperial Shrine in Solstheim, is added by Bloodmoon. The Imperial Cult Services area of the Royal Palace, which contains an Imperial Shrine, and Mournhold Temple, an Almsivi Temple, are added by Tribunal. You will only be transported to Mournhold Temple or the Royal Palace from other locations in or below Mournhold. (Thus any location added by the Tribunal Expansion.) Fort Frostmoth can actually be reached by Divine Intervention from the northwestern-most corner of Vvardenfell, thus saving the boat trip. However, most places on land in that region will end up taking you to Gnisis instead.

Note that there are a few locations where Intervention spells are disabled. In Morrowind, the only two are Magas Volar, the Daedric temple where you receive the Daedric Crescent (only on the GOTY edition), and Akulakhan's Chamber. In Tribunal, Intervention is not allowed from The Clockwork City. In Bloodmoon, you cannot cast the spells from underneath the Mortrag Glacier.

The school of Mysticism also contains the effects of Mark and Recall. These allow you to be your own instant transportation as Almsivi/Divine Intervention do, but this takes you to a point of your own design. Mark sets the point, and Recall takes you to the mark you made. This can be used for marking a place you'd want to return to easily and repeatedly, or for setting a "home" where you want to store the valuables you've gained in your travels. It is also very useful to return to a quest giver after completing a quest. The downside is that (without mods) you can only have one location Marked at any one time. Casting Mark again overwrites your previous Mark. By combining Mark/Recall and Almsivi/Divine Intervention one can reach most Temples and Shrines whitin minutes, visit the map page to find a suitable location to mark.

The propylon chamber system was devised to allow instantaneous travel among ten ancient Dunmer strongholds, which are scattered across Vvardenfell and quite isolated. Each chamber links to two others, forming the propylon circle.

To transport to a specific stronghold, you must be carrying the correct propylon index. The indices are scattered across Vvardenfell, and often go unnoticed because they are so small. Chances are not very good that you will stumble across all ten on your own, but fortunately there is a list of index locations.

The need to carry all ten indices and to follow the propylon circle in order is eliminated by the Master Propylon Index. The master index is a direct link between Caldera and every propylon chamber. It was not part of the game originally, but Bethesda added it with an official plugin which can be downloaded here. The plugin has Folms Mirel send you on a quest to retrieve every index, being given the master index as a reward.

Propylon Chambers are found in these Dunmer strongholds:

There is also an eleventh Propylon Chamber located in Kogoruhn, though it is now no longer functional.

There are additionally, a small number of items that will transport you to various locations when you put them on. They are as follows:

This bug is fixed by the Morrowind Patch Project.

Two other people who offer teleportation services are added by the Tribunal expansion. You must first have been attacked by assassins and spoken to Apelles Matius in Ebonheart in order to receive these services. After that, Asciene Rane will offer you free, instant transport to Mournhold when you ask her about Transport To Mournhold. Effe-Tei in the Royal Palace can transport you back.

Even with the variety of fast transportation methods, one often has need to move by foot for part of their journey. There are many ways to help the pedestrian in Morrowind: