Time in Morrowind is measured in two ways: game time (or in-game time) and real time (the passage of time in the real world). Game time passes faster than real time by a factor of 30, meaning 2 minutes of real time = 1 hour of game time, and 48 minutes of real time = 1 day of game time. You can attempt to check the current game time by pressing the rest button (default T), and any journal entries will have a timestamp with the day and month they were added. The rest menu will show the current hour, day, month, and days passed, but not the current year. Tamriel's calendar has 12 months (see bugs), with 28-31 days in each, and 7 days in each week. 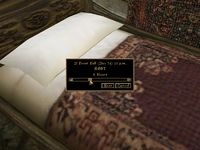 Unlike in future games, NPCs do not have schedules, and most do not react to the current time at all (though some NPCs will equip torches at night). Businesses are always open, and for the most part, quests can be given and completed at any time. In terms of game time, many things change over the course of days and months:

In terms of real time, the following things are affected:

As long as the game is not paused by opening a menu, time is always passing. You can stand around and watch the sun and moons go by, but if you need a merchant's gold to reset, or need an NPC you accidentally assaulted to calm down, this is not convenient. Fortunately, you have several options at your disposal. The easiest way to pass game time quickly relative to real time is to rest or wait. Other things that pass game time include:

You can attempt to rest at any time by pressing the rest button (T by default). You can choose the duration of your rest, anywhere between 1 and 24 in-game hours. A successful rest will pass the chosen number of hours in game time, and will also restore some amount of your fatigue, health (unless you are a vampire), and magicka (unless you are subject to stunted magicka). Any magic items you have will refill some of their charge as well. After resting, most temporary spell effects will have worn off, unless they last a particularly long time. Be careful, though: if an offensive spell effect does more damage than you can heal, you might die while resting.

While you can attempt to rest at any time, it's not always possible, and some times you may even fail. Attempting to rest in the following situations will fail and display a message on the screen: 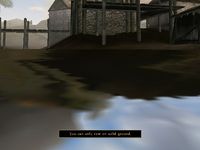 If you rest in the wilderness or in dungeons, hostile creatures may ambush you. In both the wilderness and in the safety of a bed, you might be attacked by assassins, ash zombies (at certain points in the main quest), and may be awakened by strange dreams. Leveling up also requires rest. One hour of rest will suffice, and you'll still level up even if interrupted. You can unlock the rest function by activating the bedroll in the Census Office or by completing character creation. This bedroll is the safest place to rest, as nothing, not even assassins, will ever interrupt your rest on it.

Resting in the middle of town or in somebody's house is illegal, and the game won't even let you attempt it. Instead, you will be given the option to wait. Waiting functions similarly to resting: it passes time, your fatigue recovers, and magic items recharge. However, you won't restore any health or magicka, you won't transform into a vampire (if applicable), you won't level up, and nothing can interrupt you. You can't wait while in the wild or in dungeons, only rest. You can't wait while in werewolf form. Activating a bed, bedroll, or hammock will force you to rest and not wait. Activating a bed owned by an NPC or faction is illegal, and if caught, you can be arrested, fined, or expelled. See the crime page for details. To avoid any legal trouble, consider visiting a tavern and renting a bed.

Set timescale: A Console command that can be used to alter the default ratio of game time to real time.