With the way to Sadal's Prison open, you must enter the portal that Mavos Siloreth and his colleagues have opened for you. You, Holgunn, Walks-in-Ash and Tanval must enter the prison and defeat Sadal. Before you enter the realm, Tanval would like a word with you...

"We're here because of me. So many have died. I've shamed myself and my house.
There's no guarantee we'll survive what comes next. Whether we do or not, you must promise me something."
"If I survive, I'm resigning my position. After me, Holgunn is to be the commander of our forces in Stonefalls.
The Houses will have to promote another Dark Elf to my old position. Until then, Holgunn is the only one I trust to safeguard the Pact."

Promise him this, and walk through the portal with your companions to face the abyss.

When you enter the realm, you will be accompanied by your usual companions, as well as the Vanguard. Tanval instructs them to hold the portal so that the group isn't trapped within this realm between worlds. Before you can take so much as a step off of the platform, a strange, yet familiar voice echoes from the chamber beyond...

With that, the platform you were just on, with the Vanguard still on it, ignites. Every last troop by the portal is reduced to ash. Those who were holding the portal are dead, and the portal to Tamriel is extinguished. There's no way but forward now.

Not too far within that first chamber is another ward. Break the ward and push on. This path is quite linear. Sadal will taunt you as you draw closer to his domain.

Sadal: "The Nedes are nought but dust and ash. Now you will join them."

In the large chamber past the volcanic vent, the river of lava before you bubbles and boils

Sadal rises from the depths of his prison, a bursting geyser of molten rock heralding his arrival.

Sadal is standing in the middle of a river of lava, shielded by a ward of flame. Tanval steps forward.

Here is where the battle begins. Sadal will stomp one of his feet and summon a five-pronged gout of flame. Stand between the flames as they surge forward while you fight to avoid being scorched. Skeletons will arise from the lava and begin lurching towards Tanval. Defend Tanval as he channels the power of the Coral Heart, and knock those skeletons' bones from their sockets. The armored skeletons will be sturdier than their naked counterparts, but they shouldn't be too difficult to take down nonetheless. Walks-in-Ash will provide healing, as well as ranged attacks to bombard your foes. She uses a morph of the Templar ability Vampire's Bane, especially useful against the undead enemies before you. Holgunn is here with his mace, fighting in melee range.

After a good number of skeletons have been defeated, Tanval will direct the Heart's energy towards the Brother and destroy his fiery shield.

Now's your chance to get a hit in on Sadal. Give him all you've got. Before long, Sadal roars, regaining his shield... and all of his missing health.

Tanval Indoril: "Fall back. I need a moment to rest."
Holgunn: "Cut those skeletons down. Don't let them reach Tanval."

The skeletons will rise from the lava once again. Cut them down same as before. After this wave of skeletons, Tanval will once again bring down Sadal's ward.

However, Sadal once again regenerates his shield and his health.

Tanval starts to glow bright green with the power of the Coral Heart.

He rushes Sadal, blasting the Brother with all of the magic he can muster.

Tanval dies in a burst of magic and fire. Sadal's ward is down for good. The beast steps onto the shore now, and will oppose you actively. 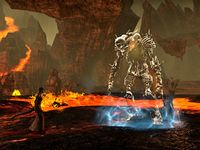 Along with his fire blossom, Sadal possesses several abilities. Occasionally, he will roar as a large aoe crawls out from under him, which explodes in a burst of flames once it reaches its perimeter. He will also swipe at you with his claws. 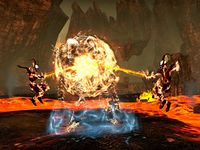 When Sadal is finally felled, his spirit appears, and he's vulnerable. You must now summon the guardians of the Tormented Spire and seal Sadal away for good, before he can recover his strength. Approach the spirit of Sadal and channel it. From the left, Hatewarden arises, and from the right comes Brimstone. Wait for the two of them to drag the spirit of Sadal back into the depths of Oblivion for good. With a flash of blinding light, Sadal and his captors are gone.

Exit the prison, and speak with Walks-in-Ash back on Tamriel.

"The Brothers of Strife are imprisoned. The storm has passed. The spire is silent again. It is over, at least for now."
Tanval told me he planned to resign his position.
"He returned to wisdom at the end. Holgunn will grumble, but he will lead, at least until the Great Houses choose another.
As for me, I must return to my tribe. I will bask in the sun and try not to think of storms. Stay moist, my friend."

After you finish speaking with Walks, something strange happens. The spirit of Tanval appears nearby. Perhaps he has one last thing to tell you before he finally moves on.

"Honor to you, my friend."
Tanval? Grandmaster?
"I had to say farewell. The honor of my House has been restored, Stonefalls is safe, and soon, Garyn and I will be side by side.
May the Three watch over you."
And you. Farewell.

Holgunn finally emerges from the Spire as the spirit of Tanval dissipates. Speak with him for your reward for this quest.

"My shield brother is gone. He died as well as anyone could.
Let's return to Kragenmoor and drink to his memory."
Tanval wished you to follow him as interim leader of our forces in Stonefalls.
"He what? Kyne take him! Wherever he is, I'm sure the old bastard is laughing at me. Imagine. Leading the military here, alone.
I suppose I should thank you, my friend. Without you, well, I hope to see you again before we meet in Sovngarde."