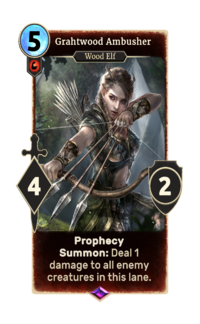 Cards in Legends can be grouped by attribute, type, or rarity. Each card costs a certain amount of magicka to play, and the cards available depend on your deck, affected by the deck class as well as your card collection. Creature cards have two basic stats: Power and Health. In addition to this, many cards have bonus effects when played. Action cards have an immediate one-off effect, while Support cards can have an ongoing effect or a set number of uses. Item cards can be equipped to Creatures.

You can earn new cards by obtaining card packs, although (with a few exceptions) the cards contained are randomly determined. All cards can be summoned for an amount of Soul Gems, depending on rarity. Cards can be earned by playing the stories, opening card packs, or winning battles. Your chosen race affects cards you obtaining through leveling.

You can have up to three copies of a card in your deck (premium cards count towards this total) except for Unique cards, of which you may only have one. AI enemies are not affected by this restriction, and this does not apply in Arena Mode.

You can have from 50 to 100 cards in your deck. If you draw all of your cards in a battle, you will be presented with a card called "Out of Cards" and your health will be reduced to your next unbroken rune. If you have no runes remaining, it reduces your health to 0.

"Premium" cards are animated versions of existing cards with a shiny gold border. They can be obtained when opening card packs (at a much rarer rate than the card's normal version), included in specific promotions such as pre-orders, or soul-summoned at a cost of four times its non-animated version.

A title (The Resplendent) can be earned for winning a game with a fully-premium deck.

Alternate-art cards are most commonly available with purchasable bundles, or for participation in Grand Melee events. For a list of cards that have alternate-art variants, see the relevant category.

Other cards that are considered Promotional, but are not part of a specific set release: