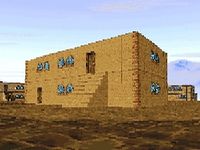 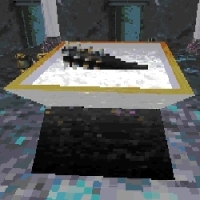 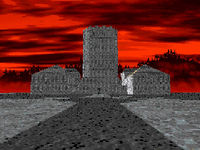 ...from Castle Llugwych, stronghold of the Blades

Once you have reached level 8, are not actively disliked by the Agents of the Underking, and have found the Wayrest Painting for Queen Akorithi, the following will soon occur:

A young courier drily hands you a letter and then stalks off without saying a word.

Check your inventory to find an interesting letter:

Queen Akorithi of Sentinel spoke highly of you as a
brave, able, and unprejudiced (player's race). Her actual
words were 'a hero.' For some time, we have been
looking for someone like that.
I will not lie to you about our loyalties. We
serve the Underking. If you are a believer in fairy
tales and consider the Underking the ultimate force of
evil, we apologize for misjudging you. Otherwise, we
need your help. You can find me at (building)
of (town) in Sentinel. I will wait one month.
-- (Agent's name)

Note: your quest log will not list the town where the Agent of the Underking resides; the town is only named in the initial letter. Since you must return to the agent later to complete the quest, be sure to remember the name of the town or keep the letter safe and easily accessible.

The specified rendezvous point is always located in a town in the Kingdom of Sentinel. If you are in a far-flung region, be prepared to travel rapidly as your contact will only wait a month. Travel to the town and find the target building. The door may be locked, so have an Open spell handy if you do not want to pick the lock or force the door. Enter the building and speak with the agent, who will greet you:

"Good day, (player's first name). My name is (agent's name). I must admit that I am surprised to see you. Are you perhaps able to help the Underking in an endeavor against the Necromancers? We will reward you liberally for this service, and provide information you will probably not be able to find elsewhere."

Agree to help, and the agent will reply:

"You will. Hmm. Remarkable. The Necromancers have taken an item of ours, a (magical item) of some value. The value is of secondary concern. The true problem is that they cursed this item and gave it to the Blades. If you are unaware, the Blades were once the honor guard for Tiber Septim. Today they are loyal to the empire and Tiber's code, but not always to the current emperor. The Underking has reason to not wish harm upon the Blades. We want you to infiltrate Castle Llugwych in Ykalon and remove the (magical item). Please have this done in (time limit) days if you want your information and reward."

Ykalon is far to the north, so gather what you need and set off without much delay. Castle Llugwych is not far from the City of Ykalon if you want to rest or resupply before or during your exploration of the dungeon. When you are ready, head for the castle and enter it.

From the entrance, head west into the dining hall. Kill the enemies in this room and go through the west door. Go up the hallway and through the door to the west. 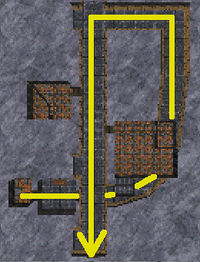 Leave the small room through the eastern door. Walk up the hallway and turn south at the intersection. Continue heading south until you see a door on your left. 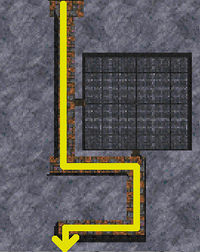 Follow the new hallway to the end and go east through the door. Enter the first room on your right in this new hallway and leave through the south door. You will arrive at an inactive elevator platform. To unlock the elevator, head east from the shaft and pull lever 1 in the tiny room. This will unlock a door to another room, where you must pull lever 2. Go back to the elevator and ride it up.

After stepping off the elevator, turn east at the junction. There is a vampire ancient in the next hallway. If you do not have any means of resisting shock damage and paralysis, your only chance is to run past it. In the room beyond is a pedestal with the enchanted item on top. If you did not kill the vampire ancient, grab the item quickly and run out the way you came immediately. Otherwise, you can take your time gathering the other treasures in the room. Backtrack to the castle's entrance the same way you came in. 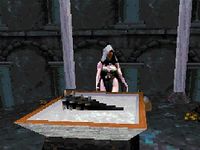 The castle's denizens won't make things easy for you

Return the item, and the Agent of the Underking will say:

Not even death can hide a true descendant of Tiber Septim from the Underking. King Lysandus did not die in the battle of Cryngaine. He was slain by treachery before it. The monument to him in Hammerfell [sic] is an empty tomb. His remains were secretly taken to an ancient tomb in Menevia, which I will now reveal to you. I do not know who betrayed Lysandus, nor why his spirit haunts the city of Daggerfall and not the battlefield of Cryngaine. I have kept my part of the bargain, and you have earned the gratitude of the Underking."

If you return the cursed item to the Underking's agent in time, you will gain/lose reputation according to the table below.