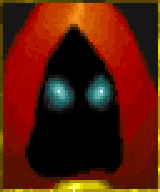 The King of Worms

The King of Worms is the leader of the mysterious Necromancers, and an archnecromancer in his own right. According to common rumor, he is thousands of years old and not aging at all, suggesting he is as undead as the legions he commands. The King of Worms operates out of Scourg Barrow, an expansive crypt deep within the Dragontail Mountains. He is on good terms with Princess Morgiah of Wayrest and the bitter enemy of the Underking.

Due to his high age and dark magic, the King of Worms has knowledge of things that very few mortals know of. He knows for example, that Prince Karolis, the great-grandfather of the late King Camaron of Sentinel, roams the depths of Castle Sentinel as a lich. He also knows the true identity of the Underking, but such information doesn't come without a steep price.

The King of Worms and his Necromancers are devoted to a singular cause. But despite horror stories to the contrary, no one knows what this cause may be. In truth, the King of Worms desires no less than to become a god. However, he needs outside help to achieve this goal...