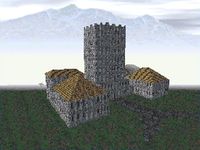 The Direnni Tower is a castle with a large, round tower at the highest point of the Isle of Balfiera in the Iliac Bay. It is the home of Medora Direnni, former court sorceress of Daggerfall.

When Queen Mynisera banished Medora from court, she had a curse placed upon the tower to prevent Medora from leaving.[1] It is said that the trapped sorceress' attempts to summon the ghost of late King Lysandus caused the tower and all of Balfiera to be haunted by undead.[2][3]