Artifacts are legendary items of lore you are given a chance to collect during Arena. Each is imbued with unique powers, and may be collected only by embarking on an artifact quest. Artifacts will disappear from your equipment list, but never randomly as their text descriptions imply; they disappear when they break or wear out from use. However, you can have equipment stores repair them, so you can keep them indefinitely if you wish.

Statistics: -3 AC
Use: Resist Fire, Spell Shield, Heals
Weight: 8 kg
In-Game Description: Auriel's Shield, an Ebony shield said to have once belonged to the quasi-mythical Elvish deity Auriel, can make its wielder nigh invulnerable. In its resistance to fire and magick, Auriel's Shield is unsurpassed. To defend its wielder from any attacks it cannot absorb, the Shield lends him or her health. Like many artifacts of Tamriel, the Shield has life and personality of its own, and does not feel bound to its user. A popular fable tells the tale of it abandoning one wielder in her greatest hour of need, but this is perhaps, apocryphal.
Discovered In: High Rock, Summerset Isle, Skyrim

Statistics: -9 AC
Use: Resist Fire, Spell Shield, Shield
Weight: 16 kg
In-Game Description: The Ebony Mail is an artifact created before recorded history, according to legend, by the Dark Elven goddess Boethiah. It is she who determines who should possess the Mail and for how long a time. If judged worthy, its power grants the wearer invulnerability to all common magical attacks that drain talents and health. It is Boethiah alone who determines when a person is ineligible to bear the Ebony Mail any longer, and the goddess can be very capricious...
Discovered In: Black Marsh

Statistics: -9 AC
Use: Troll's Blood, Spell Shield, Cure Poison
Weight: 16 kg
In-Game Description: The Lord's Mail, sometimes called the Armor of Morihaus, the Gift of Kynareth, is an ancient cuirass of unsurpassable quality. It grants the wearer the power to regenerate lost health, resist the effects of spells, and cure oneself of poison when used. It is said that whenever Kynareth deigns the wearer unworthy, the Lord's Mail will be taken away and hidden for the next chosen one.
Discovered In: Skyrim, Black Marsh, Summerset

Statistics: -3 AC
Use: Spell Reflection, Silence
Weight: 10 kg
In-Game Description: Spell Breaker, superficially a Dwarven tower shield, is one of the most prized ancient relics of Tamriel. Aside from its historic importance dating from the Battle of Rourken-Shalidor, the Spell Breaker protects its wielder almost completely from any spellcaster, either by dispelling magicks or silencing any mage about to cast a spell. It is said that the Spell Breaker still searches for its original owner, and will not remain the property of any one else for long. For most, possessing Spell Breaker for any time is power enough.
Discovered In: Hammerfell, Valenwood

Statistics: 2-12 Damage
Use: Fires spell that kills (save vs. magic)
Special: -3 AC Overall \ Never misses
Weight: 1 kg
In-Game Description: Auriel's Bow appears as a modest Elven Longbow, but it [sic] one of the mightiest weapons ever to exist in Tamriel's history. Allegedly created and used, like its sister Auriel's Shield, by the great Elvish demi-god, the Bow can turn any arrow into a missile of death and any wielder invulnerable to any lesser attacks. Without Auriel's power behind it, however, the bow uses its own store of energy for its power. Once exhausted of this energy, the bow will vanish and reappear where ever chance puts it. Its most recent appearances have been subject of gossip for hundreds of years.
Discovered In: Valenwood, Skyrim, Elsweyr

Statistics: 2-18 Damage
Use: Heals, Resist Fire, Shalidor's Mirror
Weight: 14 kg
In-Game Description: Chrysamere, the Paladin's Blade and Sword of Heroes, is an ancient claymore with offensive capabilities only surpassed by its defenses. It lends the wielder health, protects him or her from fire, and reflects any deletory spells cast against the wielder back to the caster. Seldom has Chrysamere been wielded by any bladesman for any length of time, for it chooses not to favor one champion.
Discovered In: Elsweyr, Morrowind

Statistics: 3-16 Damage
Use: Lifesteal
Weight: 6 kg
In-Game Description:The Ebony Blade, sometimes called the Vampire or the Leech, resembles an ebony katana, but its power is very dark indeed. Every time the Ebony Blade strikes an opponent, part of the damage inflicted flows into the wielder as raw power. The Blade itself may not be any more evil than those who have used it, but at some point in its long existence, a charm was cast on it so it would not remain with one bladesman. The wizard who cast this charm sought to save the souls of any too infatuated by the Blade, and perhaps he was right...
Discovered In: Valenwood, Skyrim 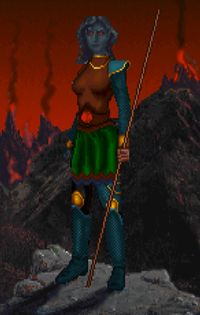 The Staff of Magnus, as equipped by the player

Statistics: 1-8 Damage
Use: Troll's Blood, Spell Shield
Weight: 3 kg
In-Game Description: The Staff of Magnus, one of the elder artifacts of Tamriel, was a metaphysical battery of sorts for its creator, the Arch-Mage Magnus. When used, it regenerates both a mage's health and mystical energy at remarkable rates. In time, the Staff will abandon the mage who wields it before he or she becomes too powerful and upsets the mystical balance it is sworn to protect.
Discovered In: Elsweyr, Valenwood

Statistics: 3-18 Damage
Use: Heals, Medusa's Gaze, Strength Leech
Weight: 16 kg
In-Game Description: The Hammer of Might, Volendrung is said to have been created by the Dwarves of the now abandoned clan of Rourken, hundreds of years before they disappeared from the world of Tamriel. It has the ability to grant health to its wielder, but it is best known for the paralyzing and strength leeching effects it has when cast at an enemy. Like the Dwarves who created it, Volendrung is prone to disappearing suddenly, resurfacing sometimes in days, sometimes in eons.
Discovered In: Hammerfell, Morrowind

Use: 1-100 gold once per day.
Weight: 0 kg
In-Game Description: King Orghum's [sic] Coffer is a small-sized chest, ordinary in appearance. It is remarkably light, almost weightless, which offers a clue to its true magic. Once a day, the Coffer will create gold from naught. When King Orghum himself possessed the Coffer, the supply within was limitless. Those who have found it since report that the Coffer eventually disappears after having dispersed enough gold to shame even the wealthiest of merchants. Where and why it vanishes is still a mystery.
Discovered In: Summerset Isle, High Rock

Statistics: -9 AC
Use: Spell Absorption, Troll's Blood, Fortify Intelligence
Weight: 0 kg
In-Game Description: The legendary Necromancer's Amulet, the last surviving relic of the mad sorcerer Mannimarco, grants any spellcaster who wears it the ability to absorb magical energy and regenerate from injury. The Amulet is mystically fortified to give the person wearing it an armor rating equivalent to plate armor, without the weight and restriction of movement. This makes the artifact popular amongst thieves and mages alike. It is the one flaw of the Amulet that it is unstable in this world - forever doomed to fade in and out of existence, reappearing at locations distant from that of its disappearance.
Discovered In: High Rock, Summerset Isle

Use: 50 extra stat points to assign to attributes, permanent.
In-Game Description: The Oghma Infinium is a tome of knowledge written by the Ageless One, the wizard-sage Xarses. All who read the Infinium are filled with the energy of the artifact which can be manipulated to raise one's abilities to near demi-god proportions. Once used, legend has it, the Infinium will disappear from its wielder.
Discovered In: Skyrim, Elsweyr, Morrowind, Black Marsh

Statistics: -6 AC
Use: Invisibility, Sanctuary, Fortify Speed
Weight: 0 kg
In-Game Description: The Ring of the Khajiiti is an ancient relic, hundreds of years older than Rajhin, the thief who made the Ring famous. It was Rajhin who used the Ring's powers to make himself as invisible, silent, and quick as a breath of wind. Using the Ring he became the most successful burglar in Elsweyr's history. Rajhin's eventual fate is a mystery, but according to legend, the Ring rebelled against such constant use and disappeared, leaving Rajhin helpless before his enemies...
Discovered In: Hammerfell, Valenwood, High Rock

Statistics: -6 AC
Use: Shield, Resist Poison, Spell Shield, Resist Shock
Weight: 0 kg
In-Game Description: The Ring of Phynaster was made hundreds of years ago by a person who needed good defenses to survive his adventurous life. Thanks to the Ring, Phynaster lived for hundreds of years, and since then it has passed from person to person. The ring improves its wearer's overall resistance to damage and grants total immunity to poison, spells, and electricity. Still, Phynaster was cunning and said to have cursed the Ring. It eventually disappears from its holder's possessions and returns to another resting place, uncontent to stay anywhere but with Phynaster himself.
Discovered In: Summerset Isle, Elsweyr, Black Marsh, Skyrim

Use: Opens a door/chest once per day.
Weight: 0 kg
In-Game Description: The power of the Skeleton's Key is very simple, indeed. With it, any non-magically locked door or chest is instantly accessible to even the clumsiest of lockpickers. A particularly skillful lockpicker may even open some magically barred doors with the Key. The two limitations placed on the Key by wizards who sought to protect their storehouses were that the Key could only be used once a day and it would never be the property of one thief for too long. Some of those who have possessed the Key have made themselves rich before it disappeared, others have broken into places they never should have entered ...
Discovered In: Valenwood, Summerset Isle

Use: Shalidor's Mirror, Fortify Speed, Heals
Weight: 0 kg
In-Game Description: The Warlock's Ring of the Arch-Mage Syrabane is one of the most popular relics of myth and fable. In Tamriel's ancient history, Syrabane saved all of the continent by judicious use of his Ring, and ever since, it has helped adventurers with less lofty goals. It is best known for its ability to reflect spells cast at its wearer and to improve his or her speed and health, though it may have additional powers. No adventurer can wear the Warlock's Ring for long, for it is said the Ring is Syrabane's alone to command.
Discovered In: Morrowind, Elsweyr