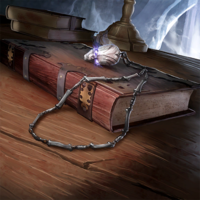 The Necromancer's Amulet (also known as the Necromancer Amulet) is a legendary artifact created by Mannimarco. In appearance it is an exquisite amulet, often with a jade skull emblazoned upon it, or sometimes carved into the shape of a tiny skull with glowing eyes. It grants the wearer magical protection equivalent to plate armor, as well as the ability to regenerate from injury, resist mundane weapons, and absorb magicka and life force. The wearer also becomes wise beyond his years and far more capable in the School of Conjuration. This comes at a price, as the amulet can drain the wearer's strength, endurance, health and stamina. The artifact is popular among both thieves and mages. The amulet is unstable in this world, and is forever doomed to fade in and out of existence, reappearing at locations distant from that of its disappearance.[1]

The amulet was uncovered by the Eternal Champion during the Imperial Simulacrum, in either High Rock or the Summerset Isles.[2]

In 3E 405, an adventurer obtained the Necromancer's Amulet after doing a task for their knightly order. The agent defeated a arch-lich in the Iliac Bay area that was raising an army of undead. After putting a stop to the undead menace, the agent discovered a clue to the amulet's whereabouts. Following the note's instructions, the agent followed the trail to a secluded wizard, who claimed that the Mages Guild stole the artifact from his great grandfather. After putting the spirit of the wizard's great grandfather to rest, the ghost revealed the location of the Mages Guild branch that stole the artifact from him. The agent ventured there and took the amulet by brute force. However, there are conflicting accounts that the artifact centered around this story was actually a different one altogether, with Chrysamere (the most prominent), the Staff of Magnus, or the Warlock's Ring taking its place in the story.[3]

A more credible source claims the Necromancer's Amulet was in the hands of the Underking around this time, who promised it as a reward for any who would return the Totem of Tiber Septim to him. Due to the Warp in the West, the fate of the amulet is unknown, although it may have been given to an unknown agent of the Blades.[4]

By 3E 427, the amulet had come to be owned by Arch-Mage Trebonius Artorius of the Vvardenfell branch of the Mages Guild. It was later claimed by the Nerevarine, although the circumstances as to how Artorius lost it are contradictory, ranging from the death of all the Telvanni councilors to the Nerevarine dueling for the title of Arch-Mage.[5]

By 3E 433, the amulet had been transported to the Arcane University in the Imperial City for safekeeping. With the return of Mannimarco after his ascent to godhood, Caranya of the Council of Mages turned traitor and took the amulet and her supporters to the abandoned Fort Ontus, where she intended to return the amulet to its creator, making Mannimarco nigh unstoppable. The Champion of Cyrodiil uncovered Caranya's treachery and killed her, returning the amulet to Arch-Mage Hannibal Traven.[6]

By 4E 201, long after the dissolution of the Mages Guild, the amulet had been discovered, and lost again, by Calixto Corrium of Windhelm after he had been driven to madness at the death of his sister Lucilla. Attempting to bring her back to life, Calixto turned to necromancy and intended to use the amulet in his experiments. The amulet was found by the Last Dragonborn, who was investigating a string of murders in the city, attributed to a serial killer called "the Butcher". The Butcher was none other than Calixto, who was eventually discovered and brought to justice.[7]