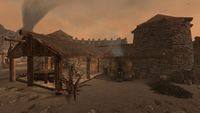 It is in the main market square, situated between Morvayn Manor to the east and the Abandoned Building to the west, backing on to the waterfront.

There is a porch attached to the front of his house, complete with a forge, grindstone, workbench and a smelter to the right of the porch. There is a

Guild shadowmark to the left of his door. To the right are two barrels, with several more and a scathecraw plant by the northwest corner of the house. There are two more scathecraw plants, one at the rear and one by the porch and a path that passes between his house and Morvayn Manor to the east. 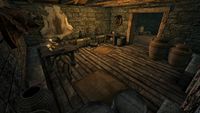 Upon entry there are two barrels on your left. There are two copies of The Poison Song, Book II on the ledge, on the south wall. To the right of these is a table and two chairs. On the table are two loaves of bread, three red apples, a green apple, a sample of Felsaad tern Feathers, a potato, copies of History of Raven Rock, Vol. I and Vol. II, and a wooden plate containing grilled leeks. In the middle of the west wall is a cooking pot on a stand with a sideboard to the right, in the northwest corner of the room containing a bottle of matze, a copy of The Red Year, Vol. I and an East Empire Company strongbox containing an East Empire pendant among the treasure. To the right of the door are two food urns. There is a doorway to the left of the food urns.

This leads into a storeroom of sorts with two more food urns on your left, beside a narrow table with two sacks underneath and four sacks and a barrel to the right. On the narrow table is a copy of The Axe Man, two bottles of Nord mead and an apple pie. There is also a lockpick and a bottle of Nord mead on the barrel. There are stairs leading up and down curving around the room to the northeast.

At the bottom of the stairs is a chamber and a locked door (key required). Under the stairs is a pile of firewood and three barrels. To the left of these are two straw bales and more firewood along with a woodcutter's axe. Between these and the door is a set of shelves containing copies of Bone, Part I and II. 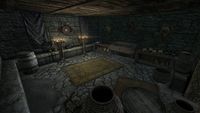 Through the door that requires a key-(see notes) is a room dedicated to the Thieves Guild. With Thieves Guild banners hanging on the wall opposite the door. On your left as you enter are two barrels of ingredients, with a chair beside them. In the southeast corner is a barrel with the

Cache shadowmark painted on the side, unlike all other thieves caches this one doesn't include a leveled dagger. On the wall opposite, between the banners is a shield rack with an enchanted hide shield and a leveled enchanted sword. On the ledge that is all around the room, under the banners is a leveled light feet potion, a leveled pickpocket potion and a leveled healing potion. To the right on the ledge is an unlocked strongbox and beside that a letter-(see notes) to his daughter, who is known to you. In the southeast corner is a sideboard containing three potent poisons and two stamina poisons, five bottles of Black-Briar Mead, one bottle of sujamma, one bottle of shein and three lesser soul gems, two empty and one filled. To the right of this against the east wall is an unlocked display cabinet containing a complete set of Blackguard's armor. Against the same wall, to the right is another sideboard containing four sweet rolls, three bottles of Black-Briar Reserve, seven lockpicks and four coin purses, one small, two medium and one large. 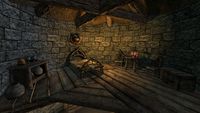 Climbing the stairs leading to an open plan sleeping area with a single bed against wall to the south. To the left is a sideboard containing two large coin purses, three goblets, a copy of Ahzidal's Descent. To the right of the bed is a small round table and two chairs. On the table is a copy of The House of Troubles, a boiled creme treat and a red apple. To the right of this, at the top of the stairs is an unlocked chest.