Skyrim:The Fate of the Skaal

After your encounter with Miraak during the quest The Temple of Miraak, a concerned Frea suggests that you follow her to Skaal Village for advice from her father, Storn Crag-Strider. Follow Frea to the Temple's exit and towards the village. On the way she will tell you about the Wind Stone and how her people are working against their will. She notes hopefully that the magical barrier around Skaal Village still stands before heading into town. In the center of the village you will find Storn and town residents Nikulas and Finna in deep concentration, all of them maintaining the magical shield. Frea will rush right up to Storn and talk to him: 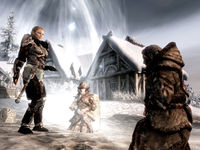 "Father! I have returned!"

Frea: "Father! I have returned! There is yet hope! "
Storn: "Frea! What news do you bring? Is there a way to free our people?"
Frea: "No, but I have brought someone who has seen things... He/She has confirmed that Miraak is indeed behind the suffering of our people."
Storn: "I feared that it would be so."
Frea: "But how is that possible? After all this time..."
Storn: "I fear there is too much we do not yet know."
Frea: (to you) "Please, tell Storn what has happened."

When talking to Storn, it becomes clear that creating the magical shield is weakening him and that time is short. He will also tell the tale of the Temple of Miraak and how dragons burned it to the ground in a huge battle long ago. Storn will conclude that dragons never managed to kill Miraak and that he has returned. He will shrewdly point out that you managed to see Miraak through the Black Book and will force you to admit being Dragonborn. He admits that he doesn't yet know whether you are meant to destroy or save his people. For now, he bids you go to Saering's Watch and learn the dragon word Miraak learned long ago, in hopes you will be able to break the spell cast upon the people of Solstheim.

Saering's Watch is the only dragon lair on Solstheim and is located in the northern part of the island, between Castle Karstaag Caverns and Benkongerike. It is inhabited by several leveled draugr and a leveled dragon. The battle can be quite hard as the enemies tend to attack in groups, so approach with caution. When all is said and done, learn the first word for the shout Bend Will and claim the contents from the boss-leveled chest next to the word wall. For an easier fight you can approach from the top of the mountain, where the dragon will busy itself attacking the draugr and not you. You can kill the dragon with ranged attacks before dropping down to learn the Word of Power. 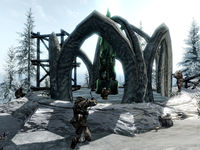 Travel to the Wind Stone, which is located across the bridge west of Skaal Village. Seven Skaal villagers surround the Wind Stone, mindlessly performing a synchronized chant with Miraak as they build a structure around the shrine. Due to a bug, this is a good time to save your game. Use Bend Will on the Wind Stone to free the villagers and destroy the structure surrounding the Stone. As soon as you shout, the villagers will wake up from the trance and wander aimlessly around, claiming that they have just woken up from a nightmare. Before long, a dangerous lurker is released. Defeat it to make sure that the villagers are truly safe from harm and check the surroundings for any casualties. The villagers will then return to Skaal Village, as should you to report back to Storn.

Back in the village, Storn has lifted the magical barrier and the inhabitants have returned to their daily duties. Storn will be waiting for you and greet you happily with, "The air is different. We are safe, which means you have succeeded." When you tell him that his people are free he will be pleased and name you an ally of the Skaal. For the next step in weakening Miraak, he will task you with cleansing the rest of the shrines all over Solsteim, thus starting the quest Cleansing the Stones. When you inform him that you need to stop Miraak, not just weaken him, he will order you to seek out knowledge on the Black Book you found in the Temple of Miraak. He advises you to visit Neloth, a wise dark elf living in Tel Mithryn who has recently visited Skaal Village and showed another Black Book to Storn. This ends the quest and starts The Path of Knowledge.