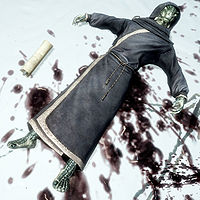 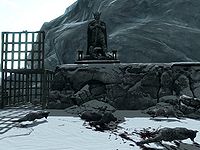 The Shrine of Talos near Ilas-Tei

Ilas-Tei, an Argonian assassin, was one of Phinis Gestor's missing apprentices. You will find him dead in the arctic reaches between Ysgramor's Tomb and Septimus Signus's Outpost, next to a shrine of Talos.

His body is surrounded by skeevers (most of which are already dead). On Ilas-Tei's body you will find blue mage robes and Ilas-Tei's ring. There is a Scroll of Fury near his body, as well as a Scroll of Calm closer to the cage. This grim scene suggests his death might be the result of an experiment that went terribly wrong. To the left of the cage are several barrels and wooden boxes. Here (on the right-most barrel) you will find a copy of the Alteration skill book Breathing Water. You will also find another Scroll of Calm and an Apothecary's Satchel.