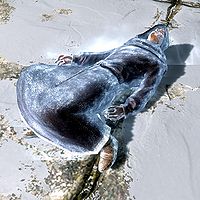 Rundi lying dead in the snow

Rundi is a dead Nord found near an altar at an unmarked location east-southeast of Winterhold.

Frost runes surround the circular stone plinth on which Rundi lies. There are some items on the altar itself, such as Rundi's dagger, a few alchemy ingredients, a soul gem, and a copy of the Alchemy skill book Mannimarco, King of Worms. You can find a set of blue mage robes and a pair of boots on Rundi's corpse.

Rundi and his twin brother Borvir are mentioned by Phinis Gestor as missing apprentices from Winterhold: "And then there's Borvir and Rundi. Twins, though they rarely agreed on anything. Those two boys were obsessed with mead. Convinced they could concoct something to compete with Honningbrew. Something about using frost magic to chill the mead for a certain period of time. I felt it was a waste, but the Arch-Mage let them proceed.".