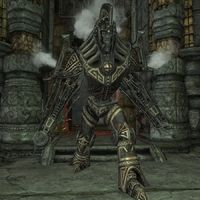 The Messenger is a powerful Dwarven Centurion that guards the Sightless Vault within Sightless Pit. It appears to be made of ebony, being black in appearance. It is initially located behind a sealed door.

You will have to fight the Messenger as part of the related quest once you've solved the two steam valve puzzles. Defeating it will open the gates guarding Sunder and Wraithguard, allowing you to claim them for yourself.

This Skyrim-related article is a stub. You can help by expanding it.
Retrieved from "https://en.uesp.net/w/index.php?title=Skyrim:The_Messenger&oldid=2095608"
Last edited on 2 February 2020, at 17:17