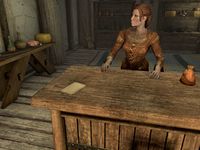 A trained goat is for sale in Whiterun Hold

In The Bannered Mare in Whiterun, a For Sale notice can be found at the counter. It is advertising for the sale of Hilda, a trained pack goat in Rorikstead.

Journey to Rorikstead and locate Halvar in order to purchase the goat. Halvar is a farmhand who can be found working the field beside Cowflop Farmhouse. He will sell Hilda for 200 gold, at which point it will act as your follower and can be given various orders such as instructions to wait at a specified city or player house.

Upon purchasing Hilda, you will be prompted to read Halvar's Journal to find out more about the goat. It can be found on Halvar's bedroll next to the field. Reading it will reveal that Halvar had come across many other tame animals in his travels, and your journal will update with objectives to track down each of them. They can be found and rescued in any order you wish. 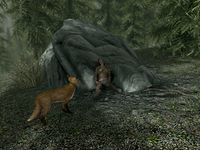 Sweet Roll stands over the body of its former master

A Bosmer and His FoxEdit

In the forest south-southwest of Half-Moon Mill, you will come across a collared fox named Sweet Roll standing over the body of a Bosmer thief. If you are having trouble finding it, stand on the rock formation by the bridge and walk south; he is located right over the hill. The thief was evidently killed by wolves, evidenced by the scattered arrows and wolf carcasses surrounding him. His body can be looted for some ill-gotten treasure as well as the Thief's Journal.

Reading the journal will reveal that the fox has a penchant for sweet rolls (thus the name). It will refuse to interact with you until you have a sweet roll in your inventory, at which point you can feed and tame it. Fortunately, the thief has five sweet rolls on his body.

A tame rabbit named Thistle can be found at the abandoned Alchemist's Shack in the mountain pass south of Ivarstead. The nearby Notes on Tamed Rabbit will reveal that Thistle enjoys carrots. A trough of carrots can be found right next to the rabbit, making it a simple matter to feed and tame it. 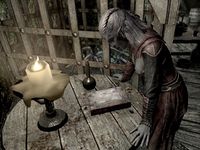 You will be led to the hidden vampire lair within the spider-infested Cronvangr Cave in order to obtain a pet frostbite spider named Arachnia. It has been tamed by a Vampire Naturalist, who is using it to harvest vast amounts of venom for the purpose of torturing her victims before she drinks their blood.

Kill the vampire and loot the Spider Cage Key from her corpse in order to free Arachnia from its cage. You can also loot the Vampire Naturalist's Journal for some background information on her experiments. Once the cage is opened, Arachnia is yours. 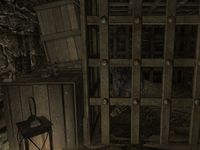 Free Skritch from a grisly fate

Within the Ratway beneath Riften, you will come across a tame skeever named Skritch found locked in a cage. You can find the body of its owner just across from the entrance to The Ragged Flagon: a failed pickpocket who planned to catch skeevers for food but decided to train one instead for use as a distraction. Loot the Skeever Cage Key from his corpse and open the cage in order to rescue Skritch and claim the animal as your own. You can also read the Pickpocket's Journal for optional background information.

Once you've obtained the last of the 5 pets, the quest concludes. Like other Creation Club pets, each one can obey a range of orders and each also has its own distinct attribute. Arachnia can place paralysis web traps and provide Potent Frostbite Venom; Hilda can provide Jugs of Milk; Skritch can locate or provide food items; Sweet Roll can locate or provide loot; and Thistle can locate plants which can be harvested for ingredients. Some of the pets can also be equipped with an Animal Collar or an Animal Pack, two items added by Pets of Skyrim; indeed, Hilda is already wearing a pack, and Sweet Roll a collar. The collar is simply aesthetic, but the pack provides a real benefit by increasing the pet's carrying capacity by 40.

Each time you get a pet a new "Teleport: <Pet's Name>" appears. This can be used to retrieve your lost pet if it ever gets "misplaced".

Notes
* Any text displayed in angle brackets (e.g., <Alias=LocationHold>) is dynamically set by the Radiant Quest system, and will be filled in with the appropriate word(s) when seen in game.
Retrieved from "https://en.uesp.net/w/index.php?title=Skyrim:Pets_of_Skyrim_(quest)&oldid=2658138"