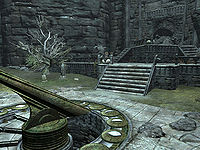 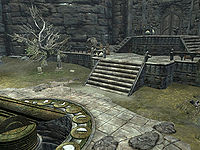 It is first encountered during the quest Chasing Echoes. After fighting your way through the Volkihar Undercroft, you come across the courtyard, which then leads to the Volkihar Ruins. You first come out of the Undercroft along the southernmost wall, having the moon dial directly in front of you in the center of the courtyard. Off to the west lies the ruined passage leading from the courtyard to the main body of the castle (which can be repaired—see notes). There is a small pond to the northwest that contains the Half Moon Crest and is surrounded by four Nordic barnacle clusters, some spiky grass plants, and some miscellaneous mushrooms. To the east is Valerica's garden, containing deathbells, nightshades, all colors of mountain flowers, dragon's tongues, a snowberry, and the Full Moon Crest. Finally, there are two ruined towers containing minor loot and more skeletons, one lying to the north and one to the east (aptly named Volkihar North Tower and Volkihar East Tower). Up the stairs to the right of the entrance to the North Tower is the Crescent Moon Crest.