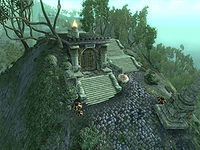 Emperor Pelagius Septim III died on the 2nd of Sun's Dawn, 3E 153 in the Temple of Kynareth on the Isle of Betony. This Temple was destroyed promptly after the Emperor's death. Not long after, residents of the Shivering Isles came to Tamriel, stole the stones of the ruined Temple, brought them to the Isles, and rebuilt the Temple in exact detail. This structure became known as the Howling Halls, as it was said that one could still hear Pelagius' screams echoing down the corridors. The Halls are now occupied by Ciirta and her Apostles of Light. 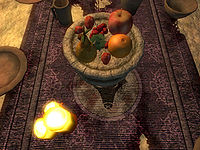 The Kvatch banner used as a tablecloth 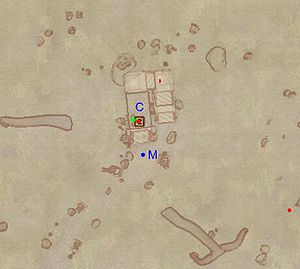 Map of The Howling Halls Exterior

When you enter during the related quest, you will find three apostles to greet you. One can be found at the end of the second corridor, while two more are in the final room. At K you will find various shoes and two apostle robes; wearing the robes will protect you from the initially hostile Apostles. The final room is a large, cathedral-like chamber full of gifts and alms brought to the apostles. At E are various ingredients and a few gold nuggets, while a good deal of precious gems can be found at the throne at F. The Alms Collection Chest in the northwest corner (J) also contains a random selection of excellent loot, including a good chance of enchanted weapons and madness matrices. 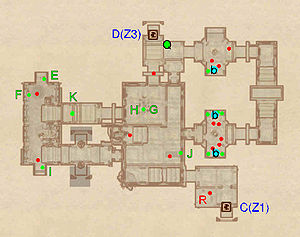 As soon as you enter the Congregation Chambers, Ra'kheran (R) will try and attract your attention and lay out his plan to kill Ciirta. Helping him and his fellow conspirators will be useful in the next zone. Six apostles will patrol the area randomly, so prepare for surprise appearances, unless you are wearing the appropriate robes. If you are hunting Apostle Daggers for Ra'kheran, make sure you don't kill the two traitors. To best explore the zone, hug the eastern wall of the central room, gather the various ingredients at J and head east. In the next room you will find two beds (b) along with four chests, two of them locked. Pass the horrid spectacle of four bloody zombies hanging from the ceiling and press on, pass a room with a bed (b) and a chest, until you arrive at Q. Here you will find various gems, a copy of The Madness of Pelagius and the pelvis of the late Emperor himself, which you'll need for the quest The Museum of Oddities.

Re-enter the central room from the north and head for the corridor departing from the southwest corner. In the next room you will find a counter full of ingredients, alchemical equipment and potions (I) and a large amount of books and a few other items at E and F. On top of the stone beam in the corridor leading to the dining room are two scrolls and a potion (K). With a decent level of Acrobatics, you can jump off the top of the stairs and grab the items one by one as you fall down. The dining room is on a higher level of the central room and is occupied by a large table laden with food (G and H). From here, head north to door D to enter Ciirta's antechamber. 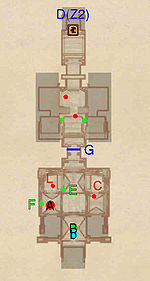 Head down the long corridor and open door G with the howling chamber key, which can be obtained from any apostle. You will find yourself in a room reminiscent of a cathedral and occupied by Ciirta (C) and her lieutenant: Luminary Kaz (L). Once both are dead, you can loot the various valuable items found at E and F as well as the boss chest at B. Remember to search the narrow ledges underneath the ceiling for more loot. In the southeast corner you will also find various canvases where Ciirta attempted to depict the Greymarch.