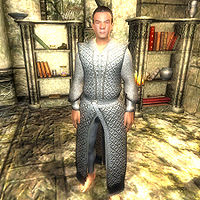 Luminary Kaz is a Nord living in the sanctuary of The Howling Halls. He is the second-in-command of the Apostles of Light.

Luminary Kaz can be found in the northernmost room of the Antechamber, guarding vengeful apostle leader Ciirta around the clock, without ever eating nor sleeping. As soon as he senses the traitorous apostles rushing into the Antechamber, he will position himself in a defensive position next to the door. Once you or the apostles attack Ciirta, Kaz will be removed from the Apostle faction and will then proceed to attack you.

He wears the unenchanted and unique Luminary Robes and carries a copy of the key which unlocks the door of the Antechamber. He also carries a leveled scroll and combat potion (both 75% chance), up to three restore health potions (19-38% chance per potion, changes with level) and up to ten gold coins. In combat, he relies on an apostle dagger as well as on a leveled set of standard heretic spells, the heretic birthsign and the heretic lesser power.