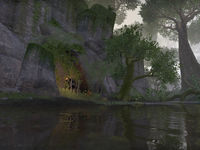 Entrance to the Lair of Maarselok

The Lair of Maarselok is a group dungeon within the mountain valleys of Tenmar, entered from a lake northeast of the Ossuary of Telacar. It is part of the Scalebreaker dungeon pack DLC, along with the Moongrave Fane. The Azureblight, a deathly corruption originating from an abandoned Khajiiti temple within the Tenmar Mountain valley, threatens the Elden Tree. When Grahtwood’s protectors tried and failed to destroy the Dragon Maarselok at the center of the blight, a second plan is hatched to enlist the help of the forest spirit Selene and her captor, the warlock Carindon. Together in an uneasy truce, and with your help, they must stop Maarselok and his blight before the corruption can spread further.

Maarselok is fought three separate times throughout the dungeon:

Hard Mode is only available in the Veteran version of Lair of Maarselok. When you get to the final boss fight against Maarselok, you have the option to activate the Azureblight Seed, located near the entrance to the plateau. Activating the seed will display the following:

<This Azureblight seed resembles those you've seen in your ascent through the corruption, except this one has writhing roots sprouting from its cracked shell. Like it's trying to plant itself in the fetid soil.>

<Try to smash the seed.>

Smashing the seed will make the boss fight more difficult and will cause Selene to become corrupted by the Azureblight, resulting in her fighting against you rather than aiding you as an ally. If your group dies, the seed will need to be activated again to reenable Hard Mode.