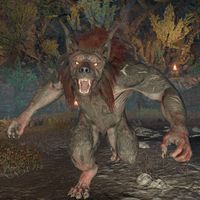 Exarch Ulfra is a Werewolf and exarch of the Gray Host. She is first encountered in Kagnthamz after she is brought back to life via a ritual using the collected harrowstorm energies.

Once you have killed Pentarch Khorb who assassinated Queen Gerhyld, you will need to find Sister Tharda who can be found down the passage in a large open chamber. However, when you reach her she will not be alone. 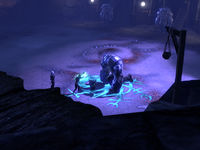 <As she performs the ritual a blue Reach sigil forms beneath her.>
Sister Tharda: "Rise exarch and be reborn!"
<The construct goes one knee and blue lights from the urn enter it.>
<A wolf howls is heard.>
<The stone construct shatters and a Werewolf Behemoth emerges from it.>
Exarch Ulfra: "Tzinghalis? Where is this place?"
<The man walks towards the werewolf.>
Exarch Tzinghalis:"The Ashen Lord commands it, and so we live once more, Ulfra."
Exarch Ulfra: "Alive again? How?"
Sister Tharda: "You have the Icereach Coven to thank for that, werewolf."
<Tzinghalis jabs his finger at her.>
Exarch Tzinghalis: "Using my recipes, witch."
Sister Tharda: "I meant no disrespect, Exarch Tzinghalis."
<Ulfra starts sniffing the air.>
Exarch Ulfra: "We're being watched, brother."
Exarch Tzinghalis: "Next time, Tharda, the Ashen Lord will expect more than the restoration of a single reliquary. Now deal with the intruders or I'll toss you to the harrowfiends."
<Exarchs Tzinghalis and Ulfra leave the chamber.>
Sister Tharda: "Come out, little skeevers. Come out and play with Sister Tharda!"
Lyris Titanborn: "How many of your sisters am I going to have to kill before you give up?"

After defeating Sister Tharda, Lyris and Fennorian will chase after the exarchs only to lose them.

Fennorian: "We need to find where they're experimenting with the harrowstorms."
<Voices will echo from the center.>
Exarch Ulfra: "You honor me with your presence, my king."
Lyris Titanborn: "Gray Host! Stay quiet and listen!"
Rada al-Saran: "This harrowstorm must be the biggest we have ever wrought, my sister-in-arms."
Svana: "That's the leader of the Gray Host!"
Exarch Ulfra: "Have we heard from Solitude? Is everything in place?"
Rada al-Saran: "I have been assured city is ripe for harvest"
Fennorian: "Rada al-Saran and Exarch Ulfra? Should we postpone the test?"
Svana: "Certainly not! The holds are counting on us! Besides, we might be able to end this threat right here and now."
<The group stops outside the door.>

When you enter, Rada al-Saran will recognize you.

Rada al-Saran: "Who dares intrude—you! The murderers who killed our beloved Tzinghalis!"
<Lyris walks forwards.>
Lyris Titanborn: "And you're about to join him."
Rada al-Saran: "Impudent mortal! You will pay for your crime!"
<Red lightning appears in his hands and he strikes Lyris, who is thrown back.>
Lyris Titanborn: "Argh!"
Rada al-Saran: "Now for the rest of these curs!"
Exarch Ulfra: "My king, allow me the honor of spilling their blood!"
Rada al-Saran: "Very well, sweet sister. Join me in Greymoor Keep when the task is done."
<Rada al-Saran teleports away in a swarm of bats.>
Exarch Ulfra: "Let this harrowstorm flay the flesh from your bones!"
<A red haze fills the air as the Harrowstorm begins.>
Fennorian: "We need to leave—Svana, no!"
<Svana stands and up drinks the elixir. A golden glow surrounds her.>
Svana: "See to Lyris, Fenn. And pray your elixir works!"
<Svana shields her eyes as she walks into the storm.>
Fennorian: "Protect Svana! She needs time for the elixir to do its job!"

After you destroy the Witch Pike, Exarch Ulfra will jump down to fight you.

Exarch Ulfra: "You killed my brother. For that, you die!"

While exploring Count Verandis Ravenwatch's memories during the dream-walk in Grayhome Castle during The Gray Council, you will speak with Ulfra while she is human. She can be found looking out through western windows into the distance. 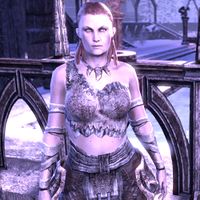 "Can you smell them, Verandis? Prey. On the wind. We should be out hunting them, not uselessly debating in these halls of stone."
You wanted to speak with me, Ulfra?
"When you see Lord Rada al-Saran, do not continue your age-old argument. He needs to remain focused.
I'll never understand your obsession with sheep, Verandis. There are hunters and prey. We are hunters. Your sympathy for prey borders on the insane."
You were mortal once.
"As were you, until Molag Bal made you into something more. Something worthy.
Lord Hircine made me one of his most powerful hunters because he knew mortality restricted me. I could not reach my full potential until he rescued me from that fate."
All I suggest is that we live in peace with mortals. They outnumber us, after all.

After progressing the quest, you can continue to speak with her but your conversation with Ulfra is barely civil.

"The wolf does not fear a thousand rabbits, it merely enjoys the bounty Hircine has provided. Humans, no matter how large their pathetic armies grow, will never threaten us.
Come to your senses, Verandis. Come back to your brothers and sisters."
I won't stop trying to convince you that my course is the correct one.
"You're a fool, Verandis. You always have been.
Why does Lord Rada al-Saran continue to humor you? We don't need you on the Gray Council. You aren't even fit to be one of Styriche's foot soldiers. Go bother someone else with your nonsense."
This is an impressive castle that Rada al-Saran has had constructed.
"Grayhome is impressive, I won't deny that. But I detest all this sitting around and debating.
I'm a hunter. I ache to feel a mortal writhe in my grasp, to watch their blood spray against the dirt. Don't you?"
You know that is not my way, Ulfra.
"Why do I even try to talk to you about such things? Lord Rada al-Saran should have dealt with you years ago, but he keeps calling you back. Bah."