Witch Pikes are summons created by the Icereach Coven and are used as conduits to absorbed life energy and souls from the surrounding area to fill the urn-like Gray Reliquaries. The initial prototypes resembled poles with an Icereach fetish on top, the fully developed Witch Pike look like a massive tendril made out of wickered roots.

While active they will continuously draw Lost Souls to them which empowers them. 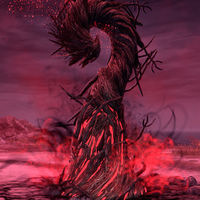 Witch Pike at a Harrowstorm

Matron Jagiska initiates the harrowstorm ritual, three Witch Pikes will emerge from the ground like plants. They need to be destroyed to disrupt the ritual and destroy the Gray Reliquary.

Soul Charged
If in close range while it is charged by a Lost Soul, it may release a burst which slightly damages you. 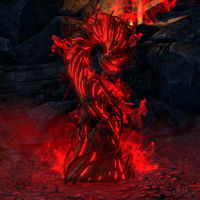 There is a single Witch Pike that can be found deep within the Morthal Barrow. You and Lyris Titanborn will be sent to investigate the barrow by Jarl Reddharn to find out what happened to his soldiers. The singular Witch Pike caused a harrowstorm on a much smaller scale which killed the squad within the barrow.

When you come across it, you will need to destroy it and its caretaker, Warlord Rukar. 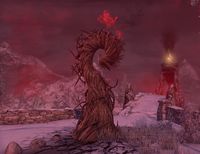 You will face a single Witch Pike guarded by Matron Urgala in Deepwood Vale during the deprecated tutorial quest Bound in Blood.