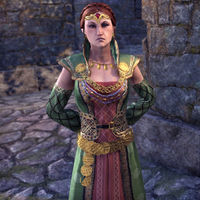 Queen Gerhyld is the wife of High King Svargrim, Queen of Western Skyrim and mother of Princess Svana.

While investigating what Brondold had found out before he died, you will find that he meant to approach Queen Gerhyld alongside Lyris Titanborn. He was going to show the Queen his evidence of the Coven threat so she could speak with Svargrim to convince him accept outsider help.

When you find Lyris in the palace courtyard, Queen Gerhyld will arrive with her guard before you can explain to Lyris what happened to Brondold.

Queen Gerhyld: "Lyris Titanborn. Your reputation is known even here in the west. Is this one of your famed Companions?"
<Queen Gerhyld stops nearby.>
Lyris Titanborn "No, but I assure you my partner is one of the Skald-King's best. Go introduce yourself, partner."

You will have to assume the role of an agent and present the evidence.

"I am Gerhyld, Queen of Skyrim. Allow me to welcome you on behalf of our kingdom, our city, and our hold.
Who might you be?"
<Player Name>, your majesty.
"The letter that preceded your arrival said an attempt was made on the Skald-King's life. It indicated that High King Svargrim would be next. My husband took that as an accusation and a threat.
He will not meet with you, but I will hear you out."
I've witnessed some concerning things since I arrived here, your majesty.
"Have you anything that would persuade my husband? It will take some substantial evidence to convince High King Svargrim to heed the words of the hated Jorunn the Skald-King."
There's evidence of Reachmen activity around Solitude.
"Reachmen transgressions will not be enough for Svargrim to accept outside help. He's a prideful man and the bad blood between him and Jorunn runs deep.
I will speak on your behalf, but you and Lyris will need to bring me proof he cannot ignore."
We'll find that proof, your majesty.
"Thank you for alerting me to this situation. I am eager to see what else you uncover.
I will do what I can, but be as discreet as possible. If you run afoul of my husband, he won't hesitate to return you to Jorunn—and not necessarily in one piece."

You can then ask her some questions before speaking with Lyris.

Why is there bad blood between High King Svargrim and Jorunn the Skald-King?

"Eastern and Western Skyrim have been at odds since the kingdom was divided. Jorunn's ambitions for the Ruby Throne, however, have created a new level of tension.
Forming alliances and raising armies for conquest. Should we not be wary of such a man?"
Svargrim thinks Jorunn wants to take over his kingdom?
"Frankly, yes. He believes Jorunn hasn't marched here with an army as yet because the western holds are firmly united against Pact rule. My husband is certain Jorunn plots to erode those allegiances.
You will not easily earn the high king's trust."

What sort of proof will persuade High King Svargrim to listen?

"You must convince my husband that a threat greater than Jorunn exists. Further, this threat must directly imperil the high king. Find proof of this and I will assist you how I can.
Helping to keep our holds safe will also allay his concerns."
What we've found so far isn't enough?
"It's enough for me to believe your intentions are sincere. Learn more about these suspicious activities you mentioned. Then bring it to me.
If this threat is as dangerous as Jorunn claims, prove it and I will make my husband listen to reason."

A soldier accused me of being a spy. Are your people always so suspicious?

"My deepest apologies. Between the Reach to our south and the Ebonheart Pact to the east, our soldiers have come to see all outsiders as a potential threat.
I will look into this. Vigilance cannot be allowed to become a bludgeon." 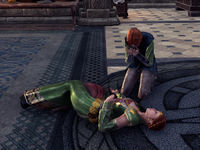 Once you have killed the Coven Witch responsible for the tragedy at Kilkreath Temple, Lyris will want you to return to Queen Gerhyld to report what you learnt about the threat of the Harrowstorms. When you arrive at the palace, a woman will run out screaming about an assassin. The mood inside will be somber as you witness the final moments of the assassin's target—Queen Gerhyld.

High King Svargrim is furious at you and Lyris' presence and your meeting with him afterwards will go nowhere. However, Svana will approach you afterwards and is determined to do right by her mother and help you out. But first, you need to find her mother's killer.