< Elder Scrolls Online: Quests: Mages Guild
My first trial in Sheogorath's realm awaits. Valaste and Shalidor have uncovered what they need to get me where I need to go.

Talk to Arch-Mage Shalidor outside the Mages Guild. He says Valaste finished translating the tome.

Talk to Valaste. She asks you if you are ready for Sheogorath's first trial and sends you to talk to Shalidor. Tell him you're ready, then enter the portal to the Shivering Isles.

Talk to Haskill. Sheogorath wants you to recover two items, a fork and a staff, before you can learn where the tome is. Sheogorath lost the fork in Skyrim during the Merethic Era. He was visiting his friend Korthor in Vuldngrav.

Enter the portal to Vuldngrav, then enter the Vuldngrav Catacombs. Examine the chest to the east. Defeat the three waves of Draugr, then use the previously frozen gate to enter the next area. Continue to the snowy room where Korthor floats in the center. Defeat him and take the fork.

Talk to Haskill who appears behind Korthor along with another portal. The staff is in Hammerfell with Prince Maleel, the Scythe of Yokuda. 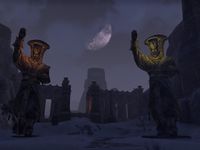 The prince's underlings placed magical seals to guard the prince's resting place. You need to use the essences, floating balls of light, to unlock the keystones at the base of each of the four statues. He gives you a power that allows you to collect the essences. You should unlock the first two statues while he thinks about the other two.

Collect four essences by running over to them. Once you have four, activate a scarab seal at the base of one of the statues. Repeat for the other statue.

Talk to Shalidor again after both statues are activated. He thinks defeating the prince's generals should activate the other two.

Use the key ritual orb in the center brazier to open the tomb. Head up the steps into Prince Maleel's Tomb. Defeat Maleel and take the Wabbajack. Go back outside and talk to Haskill on the steps.

Enter the portal to the Shivering Isles and talk to Sheogorath.

"Look, Haskill! Forky's back! It's so nice to see him again! Oh. And good to see you too, mortal. I guess."

He takes the fork back immediately, but he asks you to use the Wabbajack on the temple acolytes. Test the staff on five of them. It may turn them into one of the following things:

It doesn't work on Sheogorath, Haskill or Shalidor. Talk to Sheogorath after you finish. He takes the staff and gives you the book.

Take Circus of Cheerful Slaughter from the podium to the left of Sheogorath and Haskill. The book transports you back to the Mages Guild.

Talk to Valaste and give her the book. She gives you the Artifact-Hunter's Band and leveled gold.

Notes
* Any text displayed in angle brackets (e.g., <Alias=LocationHold>) is dynamically set by the game and will be filled in with the appropriate word(s) when seen in game.

This Elder Scrolls Online-related article is a stub. You can help by expanding it.
Retrieved from "https://en.uesp.net/w/index.php?title=Online:Simply_Misplaced&oldid=2489590"