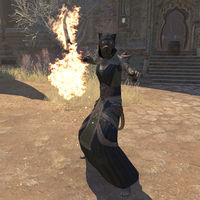 Chemists (or Alchemists) are a class of hostile humanoid NPCs who attack using a combination of chemical mixtures and their blades. They are garbed in light armor and wield a single sword.

The enemy thrusts their weapon with disciplined precision at a player, dealing minor physical damage. It also afflicts the enemy with Major Fracture for 15 seconds.

A ranged AoE flame attack. The chemist hrows a potion that sets the targeted area alight. The pool does moderate flame damage over time to all players within the red circle and should be avoided.

A basic melee attack that does moderate physical damage.

The enemy will cover their weapon in flaming oil, causing Lop and Chop to become Blazing Lop and Blazing Chop.

The alchemist throws a poison that explodes upon contact with the ground, dealing moderate physical damage and additional fire damage over time.

A basic melee attack that does minor physical damage and additional fire damage over time.

The chemist will wave a potion around to emit fumes that heal the chemist. This ability is usually used when the enemy is on low health. This spell can be interrupted to set the enemy off balance. If you stand in the healing fumes, your health can be restored.