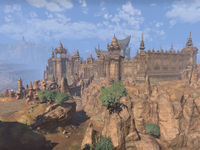 Orcrest is a ruined city found in the center of Northern Elsweyr. The once prosperous city now lies abandoned, and the angry, flu-ridden dead have risen among the ashes. The dead stalk the dilapidated market, gangs wander the streets, cannibals rule the alleys, and strange things lurk in the fetid sewers. 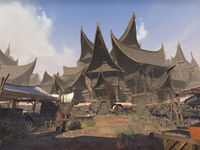 Within the city walls 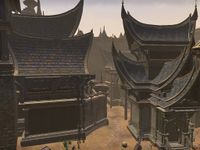 View of Red Senche Alley from the Upper City 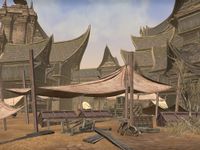 Plague harpies litter the skies, their nests laying snug on the path towards the Lower City. Undead flu victims, including Conjurers, Archers, Savages and Nightblades, stalk the streets. A decaying abomination lies in a small, open courtyard to the southeast, to the right of the city's entrance.

Shazah's Diary can be found by the entrance to the city. 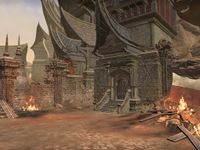 The Lower City is ablaze. Flame Atronachs and Flame Imps delight in the blaze as Butchers, Dreadnaughts, Hedge Wizards and Pyromancers watch the chaos. To the right of the district's southern entrance is a camp where refugees lie in wait for the perfect moment to run. At the northeastern end of the district, a lone Khajiit with a fire in his eyes is bent on the destruction of the city.

The Orcrest Fragment can be found on the eastern side of the district. A copy of Mathoc the Immortal can be found at the survivors' camp. 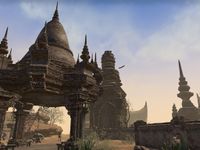 The Upper City is crawling with infected ogres and kotu gava. Chemists, arbalests, brigands and assassins walk the streets. A mad alchemist keeps her vigil on the eastern side of the city, overlooking the cannibal-infested streets below. At the manor to the north, a dark creature perches; an omen to the city's fate. 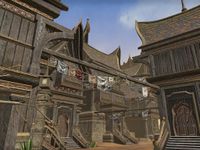 Red Senche Alley is scourged by Hungers. Feral Khajiit who've gone mad with hunger devour corpses in the streets. To the west is a hulking cannibal thug and his lackeys. The marketplace district lies to the south, and the upper city lies to the north. The Sewer Access is located to the east, close to the stairs that lead to the marketplace. 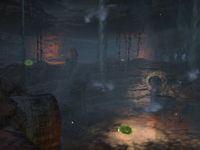 Diseased Skeevers inhabit the tunnels leading towards the Red Senche Alley, Lower City and Marketplace District Sewer Accesses. Voriplasms stalk the cavern deep within. Noordigloop the Clog wallows in the furthest recesses of the sewer system. A journal sits beside the corpse of a Khajiit alchemist at the bottom of the pit, by the stairs on the right-hand side. The dungeon's skyshard also lies in Noordigloop's pit, beside a grate near the stairs on the left.

There are four Achievements associated with this location: 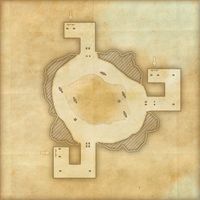