Battlemage and former Imperial advisor Abnur Tharn summoned me to Northern Elsweyr to help him and the Khajiiti deal with a rage of Dragons. 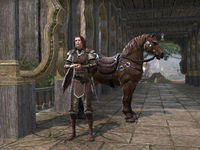 Anais Davaux with a message 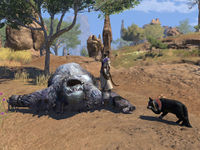 "Don't be such a nervous netch. The dead can't hurt us. But where do you think it came from?"

Abnur Tharn has a message for you. He wants you to meet him in the Khajiit city of Riverhold to discuss the Dragon problem. You can find him at K'har Zhab Hall, which lies near the southern entrance of the settlement, just past the stables.

[If you have experienced the Prologue]

"I was beginning to suspect you were never going to arrive. After Calsivius and my half-sister manipulated us into inadvertently releasing a rage of Dragons, Elsweyr has been overrun by the beasts.
We do bear some responsibility, I suppose."

[If you are meeting for the first time]

"You must be here about my summons. Good, good. I was just telling Lord Gharesh-ri and Khamira that someone would answer my call."
"Since you're here, I presume you will wholeheartedly agree to help us save Elsweyr from a rage of Dragons."
A rage of Dragons?
"So much better than flock or herd, don't you think?
The Khajiiti Defense Force isn't prepared to deal with a threat as big as Dragons. Especially since they were fighting to liberate Rimmen when the huge beasts arrived."
Liberate Rimmen?
"Stay focused. We'll deal with that later. Right now, we must assist the Defense Force. Rendezvous with us at their command post.
On your way, however, I have another task for you. I detected a series of power surges that I want you to investigate."
All right, tell me more about these surges of power.
"I was formulating a spell to track the Dragons when I noticed several surges of arcane energy not far from here. They reminded me of an old acquaintance. Has a way with portals.
If it is him, I want you to secure his help against the Dragons." 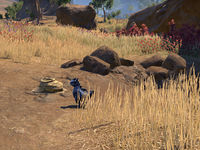 The Northern Elsweyr Defense Force is not prepared to deal with the Dragons, especially since they arrived as the Khajiit were liberating Riverhold from the Euraxian forces. Abnur Tharn has detected magical disturbances west of Riverhold, and he suspects they may be associated with the use of portals. He believes an old acquaintance of his is responsible for these disturbances. You are tasked with investigating these magical disturbances, and if his assumptions are correct, he would like you to enlist the stranger's help in fighting the Dragons.

You should begin at the marker on the side of the road, closest to the Star Haven Wayshrine. When you arrive, you will find a dead Ogrim and two locals staring at it: Thaeduna and Asazeh. Thaeduna looks about ready to poke the beast with a stick. You should ask them about the monster. Asazeh smells the stench of Coldharbour, and she's not too far off on where the creature came from. It has the signature blue skin and icy eyes of a servant of Molag Bal. It doesn't seem like the Prince's servant came here on purpose, nor that more will try to come after it, so you should continue your investigation for now. 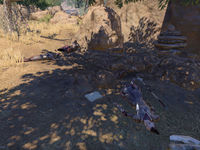 Head north towards the next location. When you arrive, you'll find a Foul-Smelling Sack sack and a blue bantam guar, which runs away when you approach. Strange. Bantam guar aren't usually such a deep blue color like that. But that doesn't matter. Investigate the smelly sack. Inside is a Rotten Turkey Leg. Gross. Why on earth this is anywhere near a site of magical disturbances is anyone's guess. Head north towards the next site and continue your investigation.

The next site is across the river. There, you'll find a group of dead Euraxian soldiers who appear to have been digging for something, as well as their Discarded Orders. Reading the orders, you discover that the Euraxians are doing the same thing you are. While you're busy snooping around the dig site, you are accosted by a Khajiit named Lharahad. Speak with him and see what he wants.

Lharahad saw you poking around and became suspicious. He accuses you of being a Euraxian agent, and mentions that a strange man with a pot on his head was skulking around here not long ago, talking to his pet bantam guar. Look for the man with the pot on his head. Lharahad said he went east of here and south of Riverhold. It's Sir Cadwell, and he's digging up a grave! Talk to him and figure out why he's here. 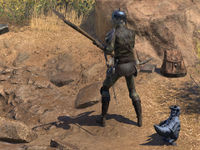 "Ah, hello there! Good to see you again, old chum! Have you come to pay your respects, too?
It was the strangest thing. I dreamed I was looking at this very gravestone. So here I came and there it is, all solid and everything!"
Is that gravestone important?
"Important? I have no idea! I suppose it must be. I saw it in a dream, after all. Or was it a vision? I get those two confused.
Anyway, I felt a sort of pull and stepped through a door. Then pish-posh, Honor's a bantam guar—and here I am!"
Abnur Tharn sent me to check on surges of power he detected.
"Tharn, you say? The grumpy battlemage? How is the old boy?
The surges were probably just me. My portal took a few tries before we honed in on this exact location. Now, why don't you take a look at the gravestone and see what you make of it, hmm?" 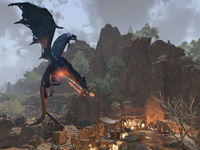 Cadwell says that he was brought to this gravestone by a vision he saw. He's not sure if the gravestone is at all important, so asks you to investigate it and see what you can make of it. It appears as if someone mighty hated was buried here. In any case, Cadwell agrees to help you against the Dragons. From here, you should head on out to the Defense Force Outpost to meet up with Abnur Tharn. The Defense Force Outpost is a ways south from Riverhold. Follow the road until you reach it. 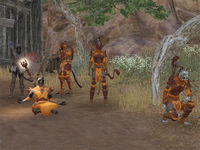 When you arrive, the outpost isn't looking too hot. Everything's on fire. Suddenly, the problem makes itself clear: a Dragon is attacking! Abnur Tharn uses his skill as an Imperial Battlemage to deter the beast, and exhausts himself in doing so. Magic takes work, and that spell was huge. Speak with Tharn and Khamira. You learn that the Euraxians invaded the outpost with a hoard of undead, and that the Dragon appeared to be assisting the invasion force. Khamira informs you that there are several important documents still in the camp, and asks you to retrieve them. Once you do, she wants you to find Captain Nala-do and give her the documents. 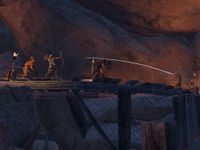 The militia slaughters the undead

The documents are scattered throughout burning tents across the camp. Collect them, and head up the hill to the west to give them to Captain Nala-do. You will find her impaling a Euraxian Necromancer. Introduce yourself and hand her the documents. She tells you to find Abnur Tharn and Khamira, and to tell them to met the rest of the Defense Force in Riverhold. Abnur Tharn is south of here, at the edge of the burning camp. Abnur Tharn knows about Zumog Phoom and his forces, and tells you he can sense vile necromantic energy coming from the mountains to the west. Khamira took a handful of soldiers and took off in that direction, and Tharn wants you to help her find the source of the undead.

Your destination is Sleepy Senche Mine. You'll find Khamira and her squad waiting at the entrance. The path within branches, so the Defense Force will take one path through the mine, and you'll take the other. Head on into the mine and kill any Euraxians that get on your way. 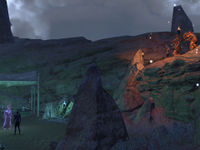 In the depths of the necromancers' den 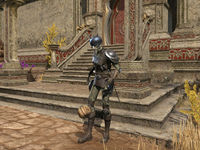 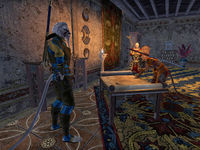 Meeting in the Riverhold Town Hall

This Elder Scrolls Online-related article is a stub. You can help by expanding it.
Retrieved from "https://en.uesp.net/w/index.php?title=Online:A_Rage_of_Dragons&oldid=2395321"
Last edited on 25 April 2021, at 06:41