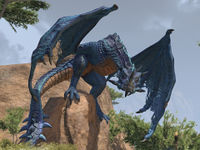 Mulaamnir is a blue dragon who serves as the second-in-command to Kaalgrontiid. He appears at the Defense Force Outpost while burning it down and can be followed to the Sleepy Senche Mine. At the mine, he will parley with you and hint at Euraxia's plans.

Mulaamnir is the first of the dragons seen flying out from the Summit of Rending Flames after Abnur Tharn accidentally unseals it using the Wrathstone. His appearance is very brief and his health bar is not displayed. After Mulaamnir burns the Defense Force Outpost down, he will fly to the south. Khamira and her soldiers will track him down to the Sleepy Senche Mine. Once they have helped you deal with the Euraxian necromancers and their forces, the squad will be attacked by Mulaamnir.

Mulaamnir: "Far enough, little insects."
<They start firing arrows at the dragon.>
Mulaamnir: "You dare challenge Mulaamnir?"
Khamira: "Dragonfire! Move!"
<Khamira leaps off the cliff. The others are not so lucky and are blasted with fire.>
Mulaamnir: "Pathetic creatures."

You can head outside the mine through a nearby tunnel, Mulaamnir will be waiting for you. However, he won't be in the mood for killing you at that moment.

Mulaamnir: "Sheathe your weapons, little morsel. Mulaamnir would talk to you."

If you were involved in the release of the dragons from the Halls of Colossus, Mulaamnir will remember and thank you.

"Mulaamnir wanted to thank you, little morsel. Your actions helped set us free of our hated prison.
Now, listen to the words I say."

In the case that you have not completed The Halls of Colossus, this is the first time you meet Mulaamnir:

"Look upon Mulaamnir and despair, morsel. You have no chance against me. No chance at all.
But Mulaamnir can be merciful. Come, let us talk."
You decimated the Khajiiti Defense Force and now you expect me to talk to you?
"Mulaamnir wants you to understand the challenge before you.
Our puppet, Euraxia, commands a legion of soldiers, an army of necromancers, and a horde of undead. Add my Dragon brothers and the hopelessness of your cause becomes obvious."
So you expect us to surrender?

If you released the dragons, he will offer mercy to you and Abnur Tharn out of a sense of gratitude:

"You and Abnur Tharn set us free. You released us from the Halls of Colossus. For that, I offer you this one last chance to survive.
If you and the battlemage leave Elsweyr, my brothers and I will not hunt you down."

Otherwise, he will offer the same clemency but in a distinctly more hostile tone:

"You and Abnur Tharn are insignificant. But even an infinitesimal flea can irritate after it crawls beneath the scales. I offer you one last chance to survive.
If you and the battlemage leave Elsweyr, my brothers and I will not hunt you down."
And if we refuse to leave?
"Then you will die. But not before we slaughter your friends and set fire to Elsweyr. Once we reduce this land to so much ash, only then will I tear you apart.
So promises Mulaamnir, whose claws have dealt a thousand deaths."

The conversation will end and Mulaamnir will fly away while giving an ultimatum:

Mulaamnir: "Leave Elsweyr, little morsel. Tell the battlemage. If I see you again, you will die."

The next death I deal is going to be yours!

The conversation will end and Mulaamnir will fly away while giving a parting shot:

Mulaamnir: "You dare ignore Mulaamnir? Impudent morsel! Euraxia is our puppet, and her army is ours to command. Leave Elsweyr and take the battlemage with you or when next we meet, you will die!" 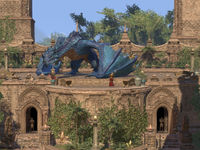 In the Rimmen Palace Courtyard, Mulaamnir informs Euraxia of the change in plans:

Euraxia Tharn: "The Moon Gate you seek lies to the southwest. Zumog Phoom has the key. Now, about my request .…"
Mulaamnir: "The necromancers have already agreed to serve Kaalgrontiid. You no longer interest us, Euraxia Tharn."
Euraxia Tharn: "How dare you! We had a deal!"

Mulaamnir will then fly off, leaving Euraxia to deal with you and your allies.

Outside Shadow Dance Ruins, Mulaamnir searches for you and your allies in an attempt to prevent you from reaching the Shadow Dance Temple. Abnur Tharn and Zamarak stay behind to keep him away, using illusion magic to keep him distracted.

After he and Kaalgrontiid fly through the Moon Gate, Mulaamnir will try to delay your companions in the Plane of Jode as you move towards the Core.

Kaalgrontiid: "Mulaamnir. The vermin still pester us. Devour them."
Muulamnir: "As you say, my brother."

As you reach a narrow canyon, Muulamnir attempt a strafing run, but Tharn will warn you of the danger:

Once you reach the Core, he will put himself between you and Kaalgrontiid who is absorbing the power:

Abnur Tharn : "Kaalgrontiid is absorbing Jode's Core! As long as the moons remain aligned, the power flowing through him is unimaginable!"
Khamira: "Get me to that platform, Tharn. I can separate the Moons using the altars."
Khamira: "You must deal with Mulaamnir, five-claw. I will divert whatever energy I can into the Dragonhorn, but use it sparingly."
Muulamnir : ''"You dare to face me, morsel?"

When you start to fight him, Kaalgrontiid will urge him to succeed:

Muulamnir: "You amuse me, little insect."
Kaalgrontiid: "Do not let them best you, Mulaamnir!"
Muulamnir: "Yes, brother, I will make this quick!"

After he is hit by the Dragonhorn blast for the first time in fight,

Muulamnir: "Arrgh! You have made me angry, pest!"

During the fight, Muulamnir may call upon Kaalgrontiid to help him charge his Moon Blast:

As he is close to death, Muulamnir will begin to despair:

As the only storm dragon in the game, Mulaamnir possesses unique capabilities, including his ability to summon storm wyrms and storm atronachs during combat.

Bite
A melee attack that causes bleeding.
Wing Thrash
A melee attack where a dragon slashes targets on its side with its wing.
Storm Aura
A constant AoE that surrounds the underside of a dragon, causing shock damage if entered.
Lightning Breath
A flight-based attack where an airborne dragon flies over and breathes lightning in a straight line.
Storm Trail
The left-over lightning from a lightning breath attack.
Moon Blast
Kaalgrontiid empowers Mulaamnir, allowing him to shoot a ray of lunar energy that can only be avoided by using Abnur Tharn's shield.

This Elder Scrolls Online-related article is a stub. You can help by expanding it.
Retrieved from "https://en.uesp.net/w/index.php?title=Online:Mulaamnir&oldid=2541998"