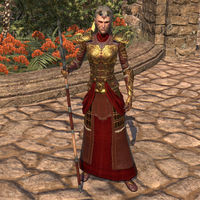 Queen Euraxia Tharn is the Imperial ruler of the city of Rimmen, found in Northern Elsweyr. She is considered by many to be a usurper queen, having conquered the city in the Frostfall Coup around seven years ago. She is a member of the Tharn Family, being the younger half-sister of Abnur Tharn and the mother of Javad Tharn.

She has recently learned of the Wrathstone and a weapon hidden within the Halls of Colossus that she seeks to control, sending Captain Calsivius to intervene on her behalf.

Your first meeting with Euraxia will be when you and Abnur Tharn decide to try and parlay with his half-sister and warn her about the Dragons. She will grant you audience within the throne room of the Rimmen Palace. Upon entering, you will be announced and Abnur Tharn will approach Euraxia, his attempt to convince Euraxia will quickly be curtailed.

Herald Vitelia: "Presenting Abnur Tharn, Grand Chancellor and Overlord of Nibenay, Imperial Battlemage of the Elder Council, and Patriarch of the Tharn dynasty. And his bodyguard."
Euraxia Tharn: "Ah, half-brother, your arrival, it's so … unexceptional."
Abnur Tharn: "Pretending to be a queen isn't—"
Euraxia Tharn: "Hush, Abnur, you bore me. Bodyguard! You look interesting. Come talk to me."
Abnur Tharn: "You heard her. Good luck."

When you introduce yourself to her majesty, her greeting will depend on whether you previously encountered her son, Javad Tharn.

"My sources indicated that my son's murderer was somewhat … taller. Ah, well.
Now, why in the world should I even consider negotiating with the monster who murdered my dear Javad?"

If you have not killed Javad, she will instead say:

"My sources indicated that my half-brother's associate was somewhat … taller. Ah, well.
Now, why in the world should I even consider negotiating with members of the losing side?"
We came to warn you. The Dragons consider you a puppet and they plan to betray you.

"A warning? How thoughtful. You do know that I defeated the Khajiiti army and took control of the Rimmen throne? I am no one's puppet, I assure you.
But why do you suppose I have anything to do with Dragons?"

Javad Tharn was your son? He tried to destroy Reaper's March. (If you killed Javad Tharn)

"And you killed him for that? By whose authority do you play judge, jury, and executioner? To think, I once dreamed of torturing you for a dozen years, but I see now that you're not worth the effort.
So, why come to me about the Dragons?"

A Dragon helped the undead your necromancer unleashed on the Khajiiti Defense Force.
[Persuade] There's no need to play games with me. Mulaamnir admitted to your alliance when we spoke.

"You think that your flowery words will cause me to slip and reveal my deepest, darkest plan? How little you understand the mind of a Tharn.
Instead, I think I will take you to the dungeons. Make you beg for mercy before I give your remains to Phoom."

[Intimidate] Abnur's right. You are naive enough to think you can control a rage of Dragons.

"So, my half-brother's valet bares their teeth? Careful, fool. They aren't as sharp as you think.
What happens next is your own fault. I lock you in my dungeons and do the most terrible things to your body. Until you die. Painfully."

You agreed to this parley. That means we're here under a truce and are free to leave.
[Persuade] You're no fool, Queen Euraxia. You know Mulaamnir will destroy you once you've served your purpose.

"Flowery words won't sway me, son-killer. But you are correct about one thing. Mulaamnir and I have a special relationship. An understanding.
The Dragons will secure my control of Elsweyr. With their help, nothing can stop me!"

[Intimidate] We expected you to break your word, but I'll break more than that. You really are just a usurper.

'"Threats and insults? You dare much, son-killer. Let's see how brave you sound when I rip the tongue from your mouth.
Mulaamnir and I have reached an understanding. The Dragons will secure my control of Elsweyr. With their help, I will be invincible!"

You can't win. We will free Rimmen and drive you out of Elsweyr.
[Persuade] Think about it! You're doing exactly what Mulaamnir wants you to do!
[Intimidate] I'm not just going to stop you, usurper. I'm going to kill you.

No matter what you say, your attempt at parley fails. Euraxia will stop talking with you and will try to have you and Abnur Tharn captured.

You're then teleported away and arrived in the Rimmen Palace Recesses.

Make your way to the palace courtyard where you'll witness Euraxia and Mulaamnir in discussions:

Euraxia Tharn : "The Moon Gate you seek lies to the southwest. Zumog Phoom has the key. Now, about my request .…"
Mulaamnir : "The necromancers have already agreed to serve Kaalgrontiid. You no longer interest us, Euraxia Tharn."
Euraxia Tharn : "How dare you! We had a deal!"

Euraxia fires a spell at Khamira, but Captain Nala-do leaps in front of her, sacrificing herself:

Euraxia will then have a surprise for Khamira, which effects her deeply:

Euraxia Tharn : "Here. Your parents have missed you so, princess!"
Khamira : "Father, Mother … no!"
<Khamira falls to her knees in shock.>
Euraxia Tharn : "I never liked you, Abnur. Now do me a favor and just die!"
Abnur Tharn : "I'll take down that shield. You deal with the undead!"

While Abnur Tharn deals with her shield, it is up to you to deal with the undead. Once the raised mummies are struck down, Abnur will have managed to bring down her defenses. Euraxia will then come down to deal with you herself.

Abnur Tharn : "The shield is down!"
Euraxia Tharn : "I'll destroy you all!"

During the battle with Euraxia she'll give a volley of taunts: 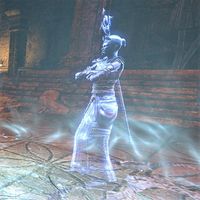 As part of Zumog Phoom's ritual to raise Cadwell the Betrayer, Phoom will conjure up a phantom of Euraxia to torment her half-brother:

Euraxia Tharn : "You're a senile old fool, half-brother. How could you be so reckless? The Dragons are your fault!"

This Elder Scrolls Online-related article is a stub. You can help by expanding it.
Retrieved from "https://en.uesp.net/w/index.php?title=Online:Euraxia_Tharn&oldid=2239785"