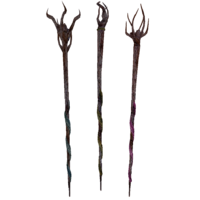 Generic staves are found in random loot and can randomly be found on some NPCs. Unique staves are all described in the article on Staves. The Oblivion-Weapons-Staves category provides a list of all available staves.

Leveled Lists are used to generate the staves found in loot and on enemies. Most of the generic staves use a "Lesser/normal/Greater" system, which determines the level at which the staves will be found:

Containers and enemies that contain/carry generic enchanted weapons (like dungeons):

NPCs that have level-dependent amount of enchanted weapons that you can pickpocket at the start of every level:

The spelling "Staffs" is used in-game for the plural (e.g. the shop Rindir's Staffs).

* There is another, more powerful, Staff of Weakness listed under Other Staves.

These are some of the most powerful staves available in the game. Unlike the other random staves, most of these combine multiple effects. Those with just one effect provide an effect that otherwise is not available from a random staff.

A. Using this staff against Vampires is not recommended as they are immune to Paralysis. Consequently the effect of this staff will merely make them invisible and hostile
B. The Banishment enchantment sets the ghost flag on the target. The intent was presumably to make the target invisible, incapable of action and incapable of being interacted with. Unfortunately, the ghost effect doesn't stop the target showing as a conversation target, and doesn't mean the player can walk through it so the result is far from perfect.
C. There are two staves identified as "Staff of Weakness:" the one in this table, and a more common variety with only a Damage Endurance enchantment.