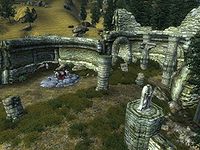 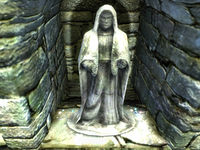 The statue and gems 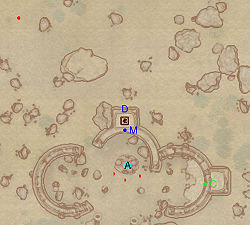 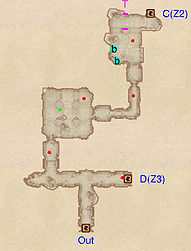 This is the smallest of the fort's three zones. The main decision here is whether to take a right at the first intersection and quickly use door D to enter the third zone and claim the boss chest, or go left and travel through the bulk of the zone and then enter the second zone, using door C.

Melee characters should be mindful of the dart traps present in the final chamber (at T) – the Necromancer residing here, in fleeing, may run through them. Pay attention and don't make the same mistake. This room also contains two bedrolls (b).

In the first room you enter you could end up fighting with up to three necromancers at the same time. To avoid this, try taking out the first enemy quickly. In this same room are three altars with Zombie corpses.

In the corridor linking the bridge and the main chamber are two small rooms. The first is locked by gate G and provides some loot. Be careful if you are using Target Open spells as these will simply pass through the gate. The second gate at F is open but still locked: if you try and activate it to close it you will first have to unlock it. As there is nothing of value behind this gate it is useful only for lockpicking practice. 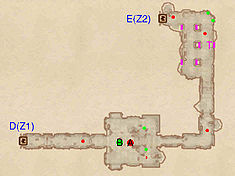 This is the third and final zone for the fort. It contains the most treasure and potentially the most enemies, including a boss-level chest (B) and a boss-level necromancer (A). As with the second level this one can be entered from either Fort Linchal (door D) or Fort Linchal Temple of War (door E).

The northern room contains three pairs of dart traps, six in total, (at location T on the map) between the pillars. Fighting the necromancers in here is risky, especially for melee characters. However, the necromancers may often run right through the traps, making your job easier. It is possible to avoid the dart traps completely if you snake through the room correctly.

In the final chamber you could end up fighting against up to three enemies, including the boss-level Necromancer. As with the other levels taking one out early can make a difference in the ensuing fight. This room also contains yet another Zombie corpse on an altar and a Headless Zombie one in a barrel.