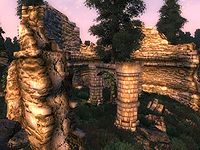 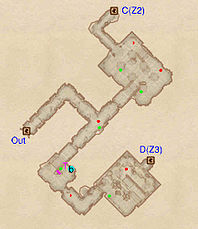 You start in this zone at an intersection. If you head left, you will only find one or two enemies and will end up at door C; heading right leads you to most of the current level and to door D. In the next small room there is a Darts trap (T) which protects a minor loot chest; it can easily be dealt with by entering sneak mode and then activating the chest. Nearby you will also find a bedroll (b).

In the first room after door C is a stone altar with a Headless Zombie corpse. 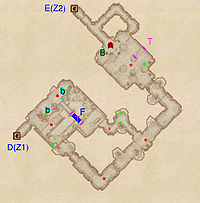 In the first room after door E are the Boss-level Necromancer boss (A), the Boss Chest (B), a Dart trap (T) and another necromancer. The boss is on a small balcony overlooking the room and you might be able to take him out without drawing the second necromancer into the fight. On the same balcony is a stone altar with a Zombie corpse.

To arrive at door D you will have to make your way through a corridor until you arrive at another balcony from which you will have to jump down into a room with two necromancers ready to greet you. This room also contains two bedrolls (b), 4 Dart traps (T) under the bridge and a drawbridge at F. This is initially raised and you'll have to lower it by activating the switch in front of it (cyan dot on the map). The bridge brings you to a previously inaccessible area which contains two chests and possibly one more necromancer.