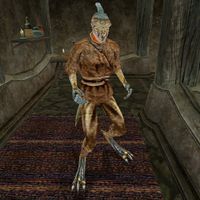 Nine-Toes is an Argonian hunter living in a house in Balmora, and a member of the Blades, as Caius Cosades will indicate. He is one of the Blades Trainers, and will provide you with medium training in Athletics, Illusion, and Sneak, but only if you join the Blades. If you mention it to him, he'll give you four portions of Moon Sugar, just the thing you need to make almost every merchant in the game refuse to do business with you (you might want to stash it somewhere before trying to purchase anything in town, or take it straight to Ajira, Ra'Virr, or any other Khajiit merchant). He is a suspect in the Death of Ralen Hlaalo.

He is wearing common pants with a matching shirt and shoes. He is carrying a steel crossbow along with eighty steel bolts. Like all Argonians, he is immune to poison, has a resistance to disease, and can breathe underwater. Aside from that, he knows the following spells: Righteousness, Absorb Speed [Ranged], Free Action, Balyna's Antidote, Cure Poison, Seryn's Gift, Resist Fire, Resist Common Disease, Resist Frost, Resist Magicka, Balyna's Perfect Balm, Strong Heal Companion, Troll's Blood, and Veloth's Grace.

He will also tell you that, as a part of his Blade activities, he is under command to update the map of the Bitter Coast, a task he finds to be impossible.