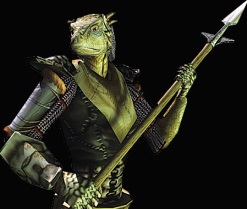 Argonians are the reptilian natives of Black Marsh. Years of defending their borders have made the Argonians experts in guerrilla warfare, and their natural abilities make them equally at home in water and on land. They are well-suited for the treacherous swamps of their homeland, and have developed natural immunities to the diseases and poisons that have doomed many would-be explorers into the region. Their seemingly expressionless faces belie a calm intelligence, and many Argonians are well-versed in the magical arts. Others rely on stealth or steel to survive, and their natural agility makes them adept at either. They are, in general, a reserved people, slow to trust and hard to know. Yet they are fiercely loyal, and will fight to the death for those they have named as friends.

With skills in combat and magic, they are well rounded characters. The lack of the ability to wear full armor as a beast race prevents Argonians from being overwhelming warriors, knights or crusaders. This, combined with the lack of magicka-increasing abilities, would make them just about the worst battlemages; however, the female Argonians can make a fair battlemage with the correct class and birthsign (Ex. The Lady offers 25 Personality and Endurance, while Favored Attributes can offer a helpful boost to Endurance and Agility). Argonian males can however make fine nightblades and excel as scouts and witchhunters, with males being more adept at thievery. Females being more adept casters more suitably go out of the lines of stealth. Going all-out mage, sorcerer or pilgrim with females will work too, but necessitates a birthsign that increases magicka, and males can make decent thieves, rogues and assassins.