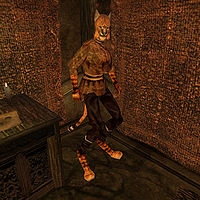 Ra'Virr is a Khajiit trader. His shop is located in southern Balmora, next to the Mages Guild. Ra'Virr has 600 gold and sells some weapons with Bound Items effects which he claims to be daedric. He wears a common shirt, common pants, and a common belt, and carries a demon tanto, a fiend tanto, a fiend katana, a steel warhammer, and a devil spear. Like all Khajiit, he can see well in the dark and can demoralize others for short periods, but otherwise knows no spells. Ajira recommends his shop when she asks you to acquire a Ceramic Bowl for her.

Being Khajiit, Ra'Virr is one of several merchants who will buy moon sugar and skooma.