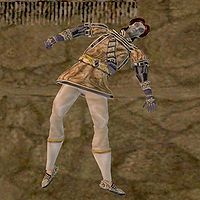 Ralen Hlaalo is a dead Dark Elf noble of House Hlaalu and resident of Balmora. He was murdered before your introduction to Morrowind and his body can be found on the first floor of his own manor in Balmora. The investigation of the murder is a House Hlaalu quest in Balmora. Asking around will point to Nine-Toes as the murderer, but further investigation (including obtaining a description from Ralen's servant, Uryne Nirith) reveals Thanelen Velas to be the true murderer.

Ralen Hlaalo's manor is a useful place to call "home" and to store valuable or unique items you have come across in your travels. Several boxes, barrels, and bags litter one corner of the main hall, and there is a dresser and cupboard upstairs. There is also a bed on the top floor that you can use. Ralen's body itself is the ultimate container, however, since it can carry an infinite weight of items and never disappears.