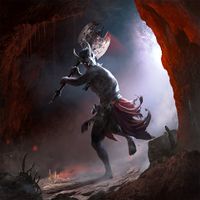 Xivilai are highly intelligent Daedra that look like tall and muscular blue/gray-skinned warriors with piercing yellow eyes. They are similar in many ways to their fellow most human-like[1]:207 daedra such as the Dremora,[2] in terms of appearance, personality, and temperament, but are of greater power and disdain subordination, being liable to disloyalty and betrayal when they feel they have not been treated with the proper deference and respect.[3] They are rarely bound to a clan, and only the most powerful in the Daedric hierarchy can compel their obedience. [4] Thus they are most commonly seen in the service of entities such as Mehrunes Dagon[5] and Molag Bal[6]. They often wield two-handed weapons and cast a wide variety of spells, including one to summon lesser Daedra.[7][8]

"The Xivilai are compelled to defeat their reflections in combat. I have seen them sneer at their own faces when inspecting a blade. There is a madness in them that has no cure."
—Vistha-Li

Many Xivilai are often encountered in pairs,[9] sometimes working together for a common goal,[10] and other times being linked to each other as twins.[11] Xivilai twins have also been observed as merging themselves using magical rituals.[11] Unlike most Daedra, Xivilai are not primarily soldiers. Instead, they hold other ranks and occupations such as assassins,[12] knights,[13] torturers,[10][11] slavemasters,[10] overseers,[14] and even judges when serving various masters.[15] Higher-ranking Xivilai are distinguished by distinct coloration along their chests.[11][16] They are not known to have a caste system like the Dremora, and are more commonly encountered as rogue and serving their own goals.[17] Some Xivilai even take up amicable occupations such as merchants, finding it preferable to killing mortals, and not desiring to be stuck following the same path their whole lives like many mortals do.[18] Xivilai are hostile to their own reflections, hence why there are no mirrors in Fargrave.[19]

Xivilai have a complicated relationship with Dremora, finding them to sometimes be ostentatious and extreme in their behavior,[20] while the Dremora find them pompous and filled with unwarranted conceit.[21] Molag Bal decided to use vestigial hybridization in The Vile Laboratory to merge Dremora and Xivilai together, creating the Xivkyn.[21][22]

They have been part of various invasion attempts, many allying themselves with Bal during the Planemeld[6] and with Dagon during the Oblivion Crisis.[5] Though not generally organized, Xivilai's Clan was led by Xivilai Moath and served alongside the Shardai and Dremora Clan, aiding Dagon in his invasion of the Battlespire during the Imperial Simulacrum. At this time, the Morphoid Daedra and the Frost Atronachs were retainers of Xivilai's Clan. On the orders of Faydra Shardai, the Frost Atronachs helped to invade the Shade Perilous along with their hated enemies, the Flame Atronachs. To prevent infighting, Xivilai made a pact with Faydra, forcing them to work together. This relationship did not hold, as an apprentice from the Battlespire, following the retreating Daedric armies, brought the atronachs into conflict over control of the realm. The unnecessary invasion of the Shade Perilous and the increasing rivalry between Faydra and Xivilai displeased Dagon. Imago Storm of Dremora Clan made a deal with the Battlespire apprentice in an attempt to restore order to Clan Dagon. Xivilai Moath was tricked into aiding the apprentice and brought his clan into open conflict with Shardai Clan. Following Dagon's banishment, Imago Storm assumed control and restored order to the clans.[23]